On Sunday, June 24, 2012 at the Mark Twain House and Museum in Hartford, members of the Connecticut Critics Circle convened to honor excellence in Connecticut theatre including presenting Jacqueline Hubbard, Executive / Artistic Director of the Ivoryton Playhouse, with the 2012 Tom Killen Memorial Award for Outstanding Contribution to Connecticut Theater.

The Connecticut Critics Circle (CCC), founded in 1990, was instituted to honor the actors, directors, designers and others who help make professional Connecticut theatre so outstanding.  The CCC is a statewide organization of reviewers, feature writers, columnists, and broadcasters. Members of the Connecticut Critics Circle not only represent newspapers, but newspaper chains, magazines, radio programs, websites, and other media outlets, reaching millions throughout Connecticut, Massachusetts, Rhode Island, and New York. 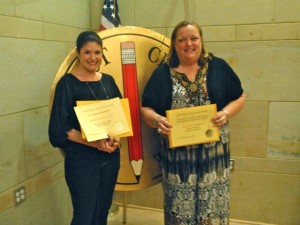 At the 2012 Connecticut Critics Circle Awards, Jacqueline Petroccia won an Outstanding Actress in a Musical award for her performance as Patsy Cline in Always….Patsy Cline. On behalf of Jacqueline Hubbard, Ivoryton Playhouse Managing Director, Krista May, accepted her Tom Killen Memorial Award for Outstanding Contribution to Theatre.

In her acceptance speech, Jacqui remarked, “Most of you know that the Ivoryton Playhouse has been around for over 100 years – more than 80 of them as a producing theatre. I have been lucky enough to spend the last 22 years there and have played an integral part in its many changes – from its renovation and refurbishing in 2000 to its reinvention in 2005 from a summer stock theatre to a year round professional producing house. I am so proud of what we have accomplished and I’m thrilled that the Connecticut Critics Circle has seen fit to recognize those accomplishments.

In this economic climate, most people thought we were mad, throwing all of our time and money, passion and energy into an old theatre that many people had forgotten even existed…but sometimes you’ve got to be a little crazy to succeed. We are still here. We celebrated our 100th birthday last year. Our audiences have been growing for the past 5 years. We have developed a strong subscription base, a fine internship program and a terrific relationship with our local community. We have a grand illustrious past but our focus is on the future and building future theatre-going audiences.”

Jacqui Hubbard is currently directing Hairspray – the Broadway Musical  that opens in Ivoryton on July 4th and runs through July 29th. Performance times are Wednesday and Sunday matinees at 2pm. Evening performances are Wednesday and Thursday at 7:30pm, Friday and Saturday at 8pm. Tickets are $40 for adults, $35 for seniors, $20 for students and $15 for children and are available by calling the Playhouse box office at 860-767-7318 or by visiting our website at www.ivorytonplayhouse.org.