Next up – Last of the Red Hot Lovers! 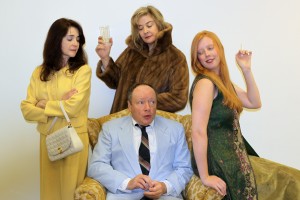 Pity the good guy. You know the one — the man who fell in love with his high school sweetheart and knew no other girl before he married. Now that a couple of decades have passed and he’s still with his wife, he’s convinced he’s missed a great deal.

Neil Simon wrote one of his best plays about this husband. The Last of the Red Hot Lovers which opens in Ivoryton on June 6th and runs through June 24th,  introduces us to  Barney Cashman, a 47-year-old restaurateur, who decides he needs to take a break from his 23-year-old marriage. On three different afternoons, he brings women to his mother’s apartment while she’s at the hospital volunteering. Behind plentiful laughs is a tender portrayal of a decent fellow who just can’t succeed in sinning.

R. Bruce Connelly* returns to Ivoryton to play the hopelessly faithful Barney Cashman. Bruce has performed at the Playhouse many times, most recently in the critically acclaimed production, The Producers. Bruce will be joined by Playhouse veteran Beverley Taylor, Kate Hubbard* and Bonnie Black*

Longtime wives who attend The Last of the Red Hot Lovers are urged to bring their longtime husbands. Each guy may well see how smart he’s been to not humiliate himself the way Barney does!

Directed by Maggie McGlone Jennings, the set design is by Rachel Reynolds, lighting design by Marcus Abbott, and costumes by LisaMarie Harry.

The Last of the Red Hot Lovers opens on June 6th and runs through June 24th for 3 weeks. Performance times are Wednesday and Sunday matinees at 2pm. Evening performances are Wednesday and Thursday at 7:30pm, Friday and Saturday at 8pm. Tickets are $40 for adults, $35 for seniors, $20 for students and $15 for children and are available by calling the Playhouse box office at 860-767-7318 or by visiting our website at www.ivorytonplayhouse.org  (Group rates are available by calling the box office for information.) The Playhouse is located at 103 Main Street in Ivoryton.

Thank you for your patience while we installed a new phone system.  When you now call the Ivoryton Playhouse will hear a menu that gives you options for the box office or the business office.  Thanks to the Middlesex County Community Foundation for a grant to pay for this important upgrade!

July 6  –  Allynn Gooen’s Goowin’s Balloowins
For over thirty years Allynn has been delighting audiences of all ages the world over.  Allynn performs his shows for theatres and festivals throughout North America as well as overseas in Asia, Australia, and Europe.  Traditionally, clowns and magicians twist balloons into creatures for kids, but Allynn Gooen uses balloons to turn the kids into creatures! Goowin’s Balloowins will capture the imagination of children and adults alike.  Join us for an unforgettable show with a bang, a twist, and a POP!

July 13  –  Casey Carle’s BubbleMania
Book early to avoid disappointment – this show will sell out
Casey has worked professionally in theatre, on and off stage, since 1985. In 1990 he went solo with BubbleMania!  His humor and skill appeals to ages 5 to 95. His outstanding scientific and entertainment achievements have been recognized by science and children’s museums coast to coast including The Smithsonian Institute.  He has proven success as bubble artist, scientist, entertainer and consultant – he was even chosen by Cirque du Soleil to act as their consultant on soap bubble based routines and scenes for their artistic teams.  Also, crowned Champion Bubble Artist after a 5 day competition between the world’s leading soap bubble manipulation and performance artists which was televised to tens of millions of viewers on Nippon TV’s (japan) most popular program: TV Champion

July 27  –  The Pushcart Players: Red Riding Hood & Other Stories
Here is an enchanting collection of classic tales – Little Red Riding Hood, The Emperor’s New Clothes, The Princess and the Pea and Hans Christian Anderson’s All’s  Well That Ends Well.  Innovative settings and Sing Along songs provide the perfect opportunity for involvement and participation in this first theatre-going experience. Each story is precious with just the right blend of faraway fantasy and contemporary reality.  Watch the wonder and magic of live theatre cast its spell on very young viewers as they journey into the imaginary world of Little Red Riding Hood and other Once Upon A Time favorites.

August 10 –  Hartford Children’s Theatre:   Tales of a Fourth Grade Nothing.
Adapted by Bruce Mason.  Book by Judy Blume
Oh, brother! Sibling mischief and best pal escapades are the problems Peter Hatcher faces in his attempts to deal with his impossible little brother, Fudge. Based on the popular title by perennial favorite Judy Blume, Tales of a Fourth Grade Nothing is a humorous look at family life and the troubles that can only be caused by a younger sibling.

Hartford Children’s Theatre’s commitment to excellence has been honored by the American Alliance for Theatre and Education’s with a prestigious Winifred Ward Award, the New England Theatre Conference’s Moss Hart Award and two 2010-2011 National Youth Theatre Awards and an additional three nominations.

August 17  –  Ivoryton Playhouse Intern Company: Don’t Count Your Chickens Until They Cry Wolf
Book by Carol Lynn Wright Pearson  –  Music by  J.A.C.Redford
Aesop was never so charming as in Don’t Count Your Chickens Until They Cry Wolf, a tour de force of Aesop’s world. This musical involves every age in tuneful pleasure, making audiences into actors.  Filled with ancient wisdom and today’s wit, clever lyrics and singable modern music, it is an irresistible attraction confected by Carol Lynn Pearson and J.A.C. Redford.  Highlights include: the famous race of tortoise and hare (“You got to keep on keeping on”); a soft-shoe number by the fox (“Flatter them, and you’ll walk away with the cheese”); a rousing peasant dance in the bundle of sticks (“The trick is to stick together”); a chorus line of sheep (“If he’s got fleece but the wrong kind of nose, maybe he’s simply a wolf in sheep’s clothes”).

August 24  –  Stories in My Pocket Too presented by Little Theatre of the Deaf
The show begins with a sign language warm-up called Knowing the Ropes.  Ropes are used to actually teach sign language!  Next, six large, colorful pockets are brought on stage.  Each pocket contains a theme.  The audience is asked to choose a pocket and the actors perform what was picked.  Will it be signing fun or fables?  Whichever pocket is chosen, the Little Theatre of the Deaf will entertain, educate and enrapture.

Join Middlesex Community Community Foundation Sari A. Rosenbaum Fund for Women & Girls for an evening celebrating women on Thursday, May 10 at the Ivoryton Playhouse.

Grab your friends and spend an evening with two women who are not afraid to talk about any subject.  From relationships to health issues, Amy Bloom and Mary Jane Minkin, MD offer frank, honest answers couched in compassion and comfortable humor.

Tickets are $45 each and the event starts at 6pm with a wine and cheese reception followed by the talk at 7pm.  Enjoy sparkling wine and desserts after the event.