The stage is her world

From humble beginnings in industrial England, Jacqueline Hubbard has created a dynamic life.

The Ivoryton Playhouse has a lot to celebrate. It’s the 100th birthday of the historic theater where a dazzling array of stars have performed over the years, including Marlon Brando, Betty Grable, Helen Hayes, Katharine Hepburn and Art Carney. 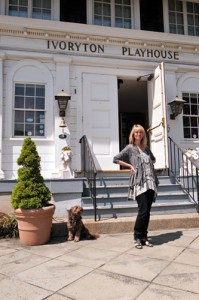 Jacqui Hubbard and her wonder dog, Lulu, at the Ivoryton Playhouse. Photo by Peter M. Weber

Jacqueline Hubbard, the Ivoryton’s executive/artistic director, has a lot to celebrate, too. It’s her 20th anniversary at the beloved theater, which she’s played a significant role in keeping alive — and even thriving — in what are far from the best of economic times for the performing arts.

Pushing back her blond tresses and flashing a broad smile, Hubbard is straightforward and deeply thoughtful as she talks about her experiences in an English accent that’s only slightly subdued by her many years on this side of the pond.

Hubbard describes the path with its unexpected twists and turns that led her to not only become an actor, director and arts administrator — but from the poor industrial town of Billingham in northeast England to the comfortable Connecticut River town she now calls home.

“There were huge economic hardships in my growing up years (in the ’60s-70s),” Hubbard recalls. “One of the few things that was a saving grace was my mother. She was a storyteller and did these wonderful little shows with us in the kitchen.”

Hubbard’s mother spurred her interest in performing early on, and then when Jacqueline was 13 she attended an arts center in town that offered free theater classes for kids. She also got a spot reviewing the “Top 10” record albums on a local radio station.

“I went to University of Leeds thinking I would do radio journalism,” she says. “But then I wandered into a black box theater. I was sunk. You just know when you’re in a place you’re supposed to be.

She became a drama major and began acting in local productions.

Soon after graduating, Hubbard came to the U.S. with her husband-to-be (they’re since divorced.) A bridge designer and engineer, his job constructing the Seven Mile Bridge took them to the Florida Keys. 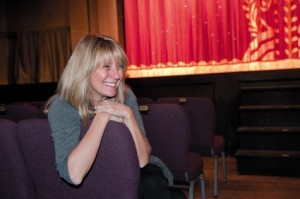 “I thought I’d died and gone to heaven,” Hubbard says. “Growing up on the North Sea, I didn’t know water could be warm.”

Hubbard spent the next decade wherever the next bridge project took them until she crossed her final bridge — the Baldwin Bridge — that was being built between Old Lyme and Old Saybrook in the early 1990s.

At this point, Hubbard had two young daughters. Her oldest, Kate, had no interest in sports, but loved theater. And so, she conceived the Madhatter’s Children’s Theatre Workshop where kids could both write and perform plays.

At the time, the Ivoryton Playhouse operated only three months a year as a summer theater.

“It seemed a shame the theater was sitting empty the rest of the year, and so I began producing children’s and community theater there during the other months,” Hubbard explains.

There was no staff, she recalls, only a part-time secretary and an all-volunteer board; plus, the building was in a terrible state of disrepair. Hubbard worked her way up from board member to board president to executive director

During her tenure at the theater, the Ivoryton Playhouse Foundation completed a total renovation of the building, and in 2006 it became a year-round professional theater.

“If anyone told me I’d end up as executive director of a theater, I’d say, ‘Absolutely not,'” Hubbard insists. “I liked the creative side, but never saw myself running a theater. And yet here I am. Sometimes I think life prepares you for what you’re supposed to be doing in different ways. Being the oldest of five kids, I ended up as organizer of everything.”

Although she’s doing more directing these days, Hubbard says every few years she gets a hankering for acting, and as a director, she feels it’s important to stay connected to that side of the curtain.

“When you direct, you carry all the stress and responsibility for the whole big picture,” she says. “Acting is a totally different creative outlet. The focus is all on you. It’s an incredible Zen-like experience when you totally connect with a part.”

“Acting also reveals things to you about yourself if you’re willing to learn,” she continues. “When I was younger, I wanted to hide in a role, behind that persona. But as I get older, acting has helped me know who I am … you get more comfortable with being yourself on stage.”

As she stands at the helm of the 100-year-old theater, looking forward to her role in its next century, Hubbard says, “There’s value in preserving history in our communities. And this place has such a remarkable place in the history of American Theater.”

For more information about the Ivoryton Playhouse and its Centennial birthday celebrations, visit www.ivorytonplayhouse.org.