Thanks to Overabove for producing this video clip for us!

Actor Michael Notardonato dives into the story behind the disco music and flashy costumes of the Ivoryton Playhouse’s latest show.

“It’s a really good story at its heart – it’s going to feel like you’re there in the story with us,” Notardonato explains. In Saturday Night Fever, the audience follows Notardonato’s character, Tony Manero, as he navigates the struggles of 1970s Bay Ridge, Brooklyn. By night, Manero lets off steam by finding romance and a chance for success at his local night club.

First brought to life on screen starring John Travolta, the stage production of Saturday Night Fever recaptures the nostalgic feeling of the film that defined the disco generation. The show features almost all the songs from the original movie’s Grammy Award-winning soundtrack, named one of Rolling Stone’s “500 Greatest Albums of All Time.” 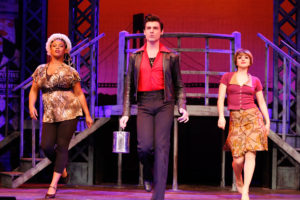 Ivoryton – Put on your “Boogie Shoes” for Saturday Night Fever, one of the most loved dance stories of all time is opening up at the Ivoryton Playhouse on August 9th!

The year is 1979 and in Brooklyn, New York, Tony Manero, a young man with a dead-end job and an extraordinary ability to dance, has only one ambition in life – to become the disco king. When he meets Stephanie, who also dreams of a world beyond Brooklyn, they decide to train together for a dance competition and their lives begin to change forever. Based on the 1977 film that became a cultural phenomenon, the electrifying score is packed with legendary hits from the Bee Gees including the classics: “Stayin’ Alive,” “Night Fever,” “Jive Talking,” “You Should Be Dancing” and “How Deep is Your Love?” 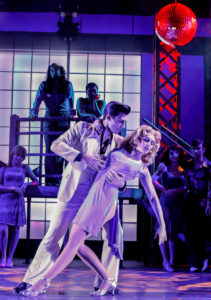 Originally based on Nik Cohn’s 1975 New York Magazine article “Tribal Rites of the New Saturday Night”, this stage adaptation premiered in the West End in 1998 at the London Palladium, and then at Broadway’s Minskoff Theatre October 21, 1999, playing 27 previews and 501 regular performances before closing December 30, 2000.

Almost all of the songs from the original movie sound track are included in the stage musical. The album remained 24 weeks on the top of the U.S. album charts and stayed until March 1980 on the charts. In the UK, the album also achieved first place for 18 weeks and it is one of the most successful movie sound tracks of all time. In 1979 it won a Grammy as Album of the Year. In 2003 it reached # 131 of Rolling Stone’s “500 best albums of all time”.

The production stars Michael Notardonato* as Tony and Caroline Lellouche* as Stephanie. Lellouche was seen last year in Ivoryton’s production of CHICAGO. Notardonato is reprising the role of Tony which he has performed twice before to critical acclaim. “At Riverside, the Travolta role of disco-king Tony Manero is taken by Michael Notardonato who has the looks, moves and charms to carry the show handily. Unlike Travolta in the dramatic film which featured dancing to a Bee Gees soundtrack, Notardonato has to sing for his supper, as well as emote and dance the night away. No worries here – Riverside’s Tony has strong and expressive pipes and delivers his five numbers stylishly. He truly embodies the restlessness of the 19-year old stuck in a dead end job, frustrated at how his parents treat him, and who lives for those Saturday night’s at the 2001 Odyssey, the Brooklyn discotheque that serves as his weekly kingdom.” – BroadwayWorld.com 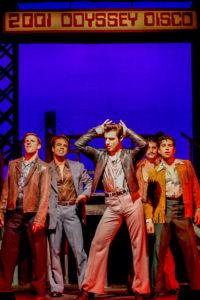 The production is directed and choreographed by Todd Underwood and musical directed by Mike Morris, with set design by Martin Marchitto, lighting design by Marcus Abbott and costume design by Lisa Bebey.

Please be advised that Saturday Night Fever, similar to the movie, contains adult language and situations.

The Ivoryton Playhouse is delighted to announce our second annual Women Playwrights Initiative.

Thanks to all participants, our inaugural Initiative was a resounding success. We once again seek submissions of one-act plays by women playwrights.

The Women Playwrights’ Initiative develops new one-act plays by and about women, and the issues that shape their lives. Friendship, political and economic advocacy, sexual satisfaction, aging, gender equality, racial issues, marriage, singlehood, motherhood, careers, and power.  The Initiative provides a safe, nurturing environment for play development, including a week of intensive rehearsal with the playwrights, directors, and actors. It will culminate in a staged reading festival in February/March 2018, Passion, Power, Prose: Women Playwrights’ Initiative featuring interactive talkbacks with the playwrights, directors, actors, and audience.

Ten minute plays are acceptable, and all plays must run no more than one hour.

We will be accepting completed manuscripts by email only.

The week of rehearsal culminating in staged readings on Friday and Saturday nights will be in February/March 2018. Writers whose works are chosen will come to Ivoryton for a week to work with directors and actors on their play.  We will provide housing.  Transportation will not be provided.

Interested playwrights should email a completed manuscript, (for musicals include a script and CD), bio, and resume, including your telephone number and email address.

The Women Playwrights’ Initiative also seeks resumes from directors, and those interested in being readers, both men and women.

Play submissions, and resumes from directors and readers should be emailed to Laura Copland, Director of Play Development at Ivoryton Playhouse, laurac@ivorytonplayhouse.org. 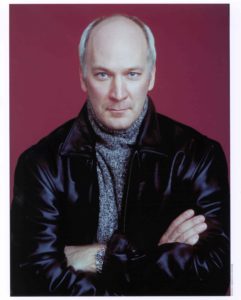 Featuring patriotic anthems and selections from Camelot, South Pacific, The Sound of Music and more.

American bass-baritone David Pittsinger is renowned as a stage performer of the greatest distinction.  He garnered critical praise for playing the role of Emile de Becque in the Lincoln Center revival of South Pacific in 2008 and Ivoryton’s acclaimed production in 2014.  He last graced the Ivoryton stage in the 2016 production of Man of La Mancha.

Mr. Pittsinger has appeared on leading opera and concert stages around the world, he is equally at home in baroque through contemporary operas, as well as musical theater.  His vocal range and color are exceptional, enabling him to perform a variety of repertoire and styles.

We are delighted and honored to welcome David Pittsinger back onto the Ivoryton Playhouse stage for two very special performances to benefit the theatre’s programs.

Please call our box office 860.767.7318 to purchase tickets or order online by following this link