The Fifth Annual Ivoryton Playhouse Fall Golf Classic at Lake of Isles – South Course
a private club of distinction for an elevated golf experience
In memory of Mark C. Yellin 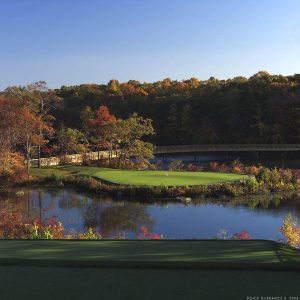 This is a unique golfing opportunity. The South Course at Lake of Isles is a members only course and not open to the public.

Since opening in 2005, Lake of Isles has consistently been ranked as one of the top golf facilities in the country. The Rees Jones designed layout gives guests the ultimate golf experience. Guests will enjoy exclusive access to the challenging, private South Course which features rolling terrain, island greens and tees and extraordinary views from every hole.

Lake of Isles is in picturesque southeastern Connecticut, adjacent to Foxwoods Resort Casino.

Owned by the Mashantucket Pequot Tribal Nation, two courses North (public) and South (members only), wind their way through 900 acres of wooded Connecticut countryside and around a 90-acre lake. Managed by Troon, the worldwide leader in upscale golf course management, Lake of Isles offers the ultimate golf experience. In addition to superior service and impeccable course conditions, amenities include a 50,000 sq. ft. clubhouse. 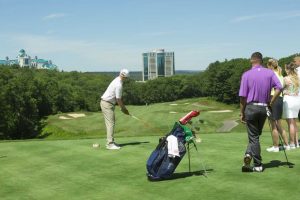 Just Golf! reservations include a round of golf on the exclusive, private, members only South Course at Lake of Isles, carts, box lunch in carts at start of play, a buffet dinner and awards ceremony at the end of play and a chance to win raffle and silent auction items.

Tournament Sponsor $5,000
Four golfers with preferential tee placement
Two tickets to a show at Ivoryton Playhouse for each of your golfers (subject to availability)
Recognition as a Tournament Sponsor in all press releases and color logo on all event literature, etc. (Exposure 70,000+)
Color logo on event banner hung on the day of the tournament
Company logo or name listed on all golf carts used during event
Two additional invitations to Buffet Dinner after tournament and half page ad in tournament program
Acknowledgment on the Ivoryton Playhouse website with link to your company

Gold Sponsor $2,000
Four golfers with preferential tee placement
Recognition as a Gold Sponsor in all press releases and event literature (Exposure 70,000+)
Color logo or name on event banner hung on the day of the tournament
Company logo or name listed on all golf carts used during event

Tournament, Gold and Silver sponsorship reservations include a round of golf on the exclusive, private, members only South Course at Lake of Isles, carts, box lunch in carts at start of play, a buffet dinner and awards ceremony at the end of play and a chance to win raffle and silent auction items. 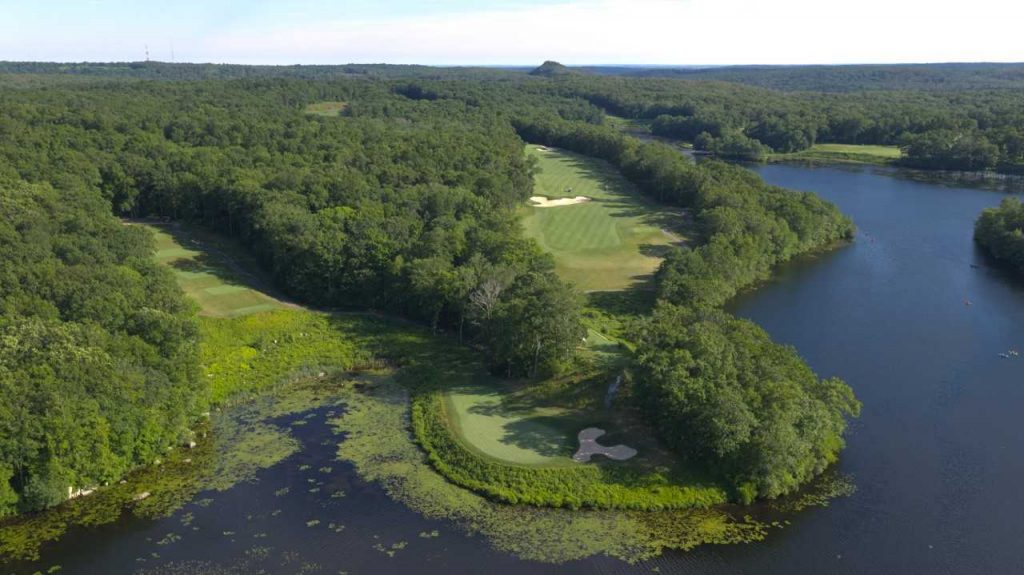 Check out our video for SHEAR MADNESS! Patrick Noonan and Lisa McMillan talk about this hilarious show on stage now until Sunday, October 6th. And when we say hilarious – we mean it!! Shear Madness is one of the most popular productions in the world and it’s so amazing to hear so much hearty laughter in our house each night! Don’t miss!

Our thanks to Overabove for producing our great videos!

SHEAR MADNESS at the Ivoryton Playhouse

Ivoryton – Shear Madness, one of the most popular comedy productions in the world, is opening in Ivoryton on September 18, 2019. This iconic production was first produced in Boston in 1980 and has been delighting audiences ever since with its unique blend of madcap improvisation and spine-tickling mystery. 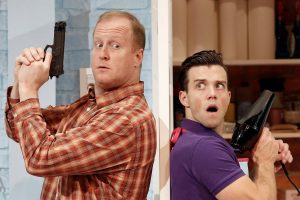 This unique comedy-whodunit takes place today in the Shear Madness hairstyling salon and is chock full of up-to-the-minute spontaneous humor. During the course of the action, a murder is committed and the audience gets to spot the clues, question the suspects, and solve the funniest mystery in the annals of crime. The outcome is never the same, which is why many audience members return again and again to the scene of the mayhem.

Voted “Best Comedy of the Year” seven times by the Boston Globe and recipient of the title “Best Play of the Year” by both the Chicago Sun-Times and the Philadelphia Enquirer, Shear Madness has also received the Raven Award from the Mystery Writers of America and has been inducted into the Comedy Hall of Fame, the first play ever to receive that accolade. 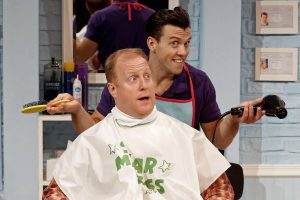 Shear Madness is listed in the Guinness Book of World Records as the longest running play in the history of the USA. The flagship Boston company has given birth to 50 productions in the U.S. and Shear Madness has been translated into 23 foreign languages, playing worldwide in a host of cities including Barcelona, Buenos Aires, Madrid, Paris, Rejkavik, Rome, Tel Aviv, Melbourne, Johannesburg and Seoul. Over 12.5 million people worldwide have joined in the fun.

The production features veteran performers Jordan Ahnquist*, Patrick Noonan*, and Lisa McMillan* who have performed these roles many times – most recently in the off Broadway production. They will be joined by Ivoryton Playhouse alum Bill Mootus* and Siobhan Fitzgerald* and Lev Harvey will be making his Playhouse debut.

The production is directed by Robert Lohrmann with set design by Daniel Nischan, lighting design by Marcus Abbott and costume design by Liz Saylor.

(Group rates are available by calling the box office for information. Discounted tickets after 6pm on Thursday evenings – get half price adult ticket (subject to availability). Six-Tix are only available at the Playhouse Box Office window and do not apply to special events.  Limit 4 Six Tix per person.) The Playhouse is located at 103 Main Street in Ivoryton.

Members of the press are welcome at any performance after September 20, 2019

David Lutken talks about WOODY SEZ: The Life and Music of Woody Guthrie at the Ivoryton Playhouse. 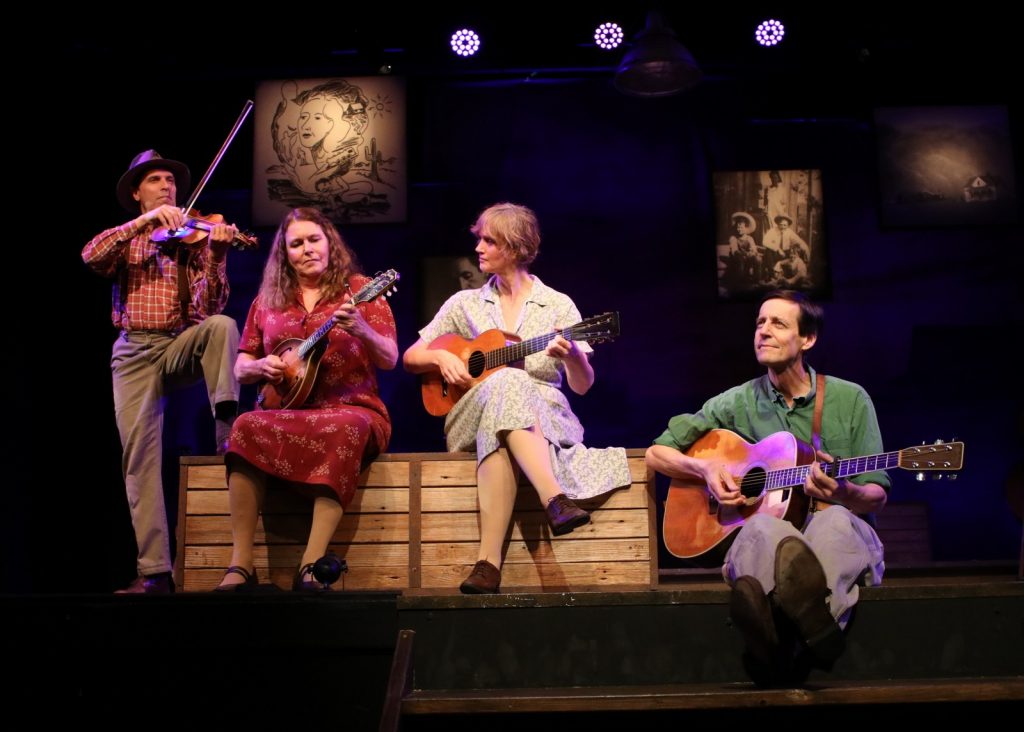 WOODY SEZ:  The Life and Music of Woody Guthrie
at the Ivoryton Playhouse

Ivoryton – WOODY SEZ: THE LIFE AND MUSIC OF WOODY GUTHRIE, the internationally acclaimed West End and Broadway hit, opens at the Ivoryton Playhouse on Wednesday, October 23rd. The tumultuous, touching, tragic and joyful tale of “America’s greatest folk poet” told in his own words and featuring Bound for Glory, Pastures of Plenty, The Ballad of Tom Joad, This Land is Your Land, and two dozen more of Woody Guthrie’s indelible protest songs, is brought to vivid life with an award winning cast including creator David Lutken* as Woody, with Darcie Deaville, David Finch*, Maggie Hollinbeck* and Andy Christopher*. 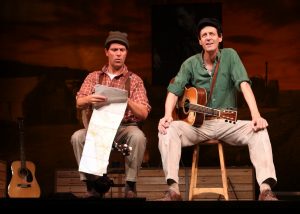 This show is a celebration of one of the giants of American music. A joyful, uplifting narrative about a difficult man’s difficult life during difficult times, WOODY SEZ is a tale of struggle, activism, patriotism, and commitment. Guthrie’s songs have become ambassadors of the best of the American spirit.

Introduced at the Edinburgh Festival in 2007, WOODY SEZ has played in over 50 cities in the US, the UK, the Middle East and across Europe.

Lyn Gardner, theatre critic for The Guardian, WROTE OF THE London performance – “This low-key, high-spirited celebration of Guthrie’s life and music knocks big West End biopics into a heap of dust” Peter Marks of the Washington Post wrote, “ The musicianship is first class; the cast effortlessly adapts to the rousing spirit of the songwriter’s heartland balladeering and protest music. It’s pleasant to be reminded that, once upon a time in America, raising one’s voice in dissent could make for some beautiful music.” 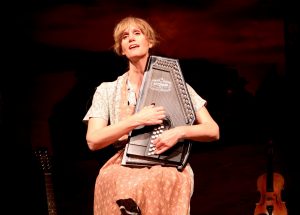 The performance, in the folk tradition is unamplified and authentic. (The show and the musical arrangements incorporate over 20 acoustic instruments). Hootenannies will follow Sunday matinees – check our website for more details. 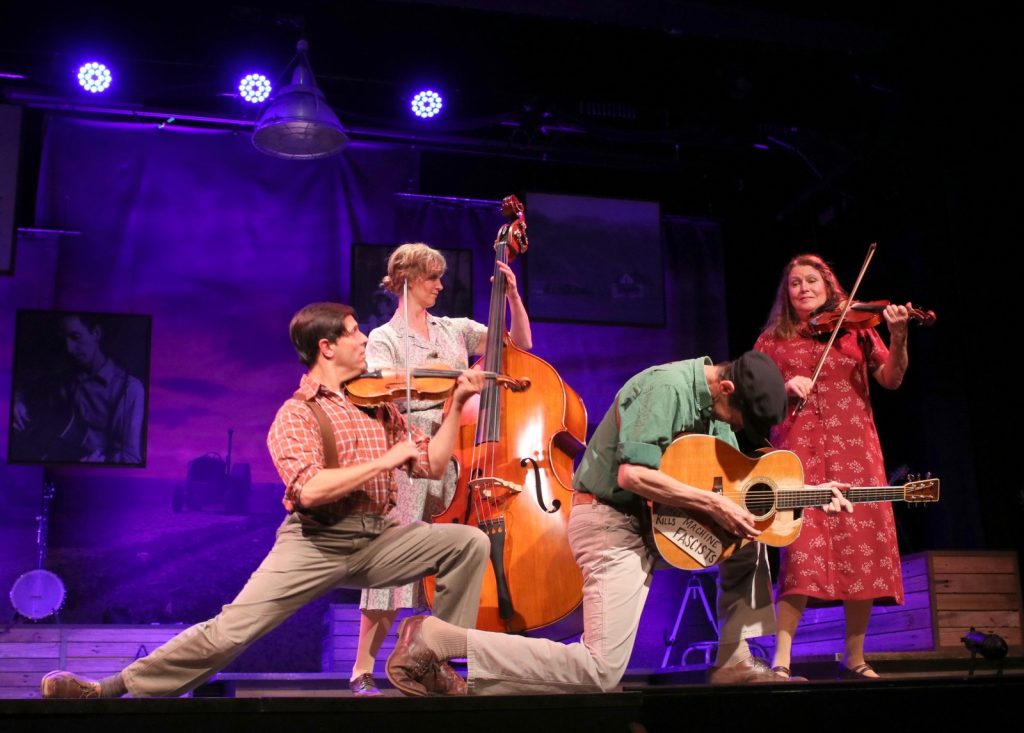