Our thanks to Overabove for producing this great video for us!

“Nurse Jackie’s” Stephen Wallem
To lead cast in new play by Mike Reiss
I HATE MUSICALS: THE MUSICAL
at the Ivoryton Playhouse 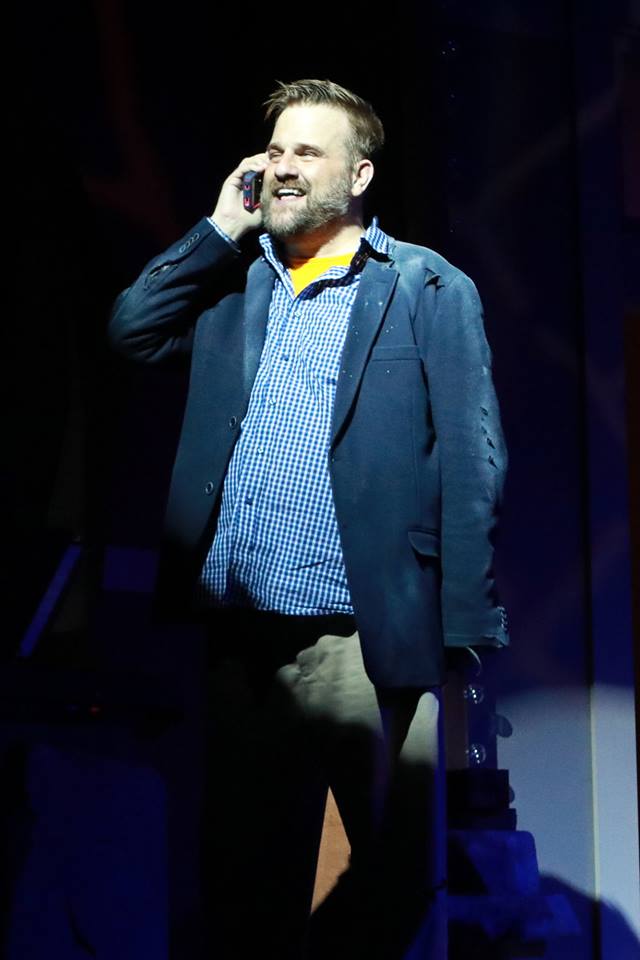 New York/Ivoryton – Simpsons’ television writer and producer Mike Reiss is back in Ivoryton with his hilarious world premiere of I HATE MUSICALS: THE MUSICAL! It’s the story of a cranky comedy writer trapped in the rubble of an LA earthquake.  His life is playing out before his eyes in the form of a musical — and he hates musicals!  With numbers sung by everyone from Sigmund Freud and Satan, will he learn to be less cranky?

Stephen Wallem*, a SAG Award-nominated actor best known as Thor Lundgren for seven seasons on the Emmy-winning Showtime series “Nurse Jackie”, will lead the cast as Alvin, the comedy writer. Stephen worked as a stage actor and After Dark Award-winning cabaret singer in Chicago before moving to New York to make his television debut on “Nurse Jackie.” Other television appearances include Randall on Louis CK’s surprise limited series “Horace and Pete” and Chad on “Difficult People.”

I HATE MUSICALS: THE MUSICAL features new music composed by Walter Murphy, composer of the 70’s classic A Fifth of Beethoven (which was included in the soundtrack of SATURDAY NIGHT FEVER!)The play is one man’s zany ride through relationships with mothers and fathers, analysts and wives and with a host of surprising characters making unexpected appearances. Ultimately, the story is a traditional one about life, love, show business, and the importance of being kind. 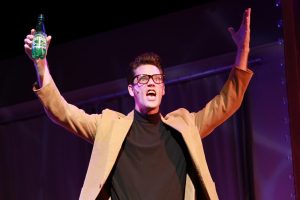 Reiss, who is writer and producer for the long running TV show, The Simpsons, also created the animated series The Critic; the webtoon Queer Duck and worked on the screenplays for Ice Age: Dawn of the Dinosaurs; Horton Hears a Who!; The Simpsons: The Movies; and, My Life In Ruins. Ivoryton audiences turned out in droves in the June 2013 for his hilarious play, I’M CONNECTICUT, which was a huge popular and critical success and COMEDY IS HARD in September of 2014 with Micky Dolenz and Joyce DeWitt.

I HATE MUSICALS: THE MUSICAL opens at the Ivoryton Playhouse on September 27 and runs through October 15, 2017. Directed by James Valletti, the cast includes Playhouse favorite R. Bruce Connelly*, and Will Clark, Sam Given*, Amanda Huxtable*, Ryan Knowles*. The set design is by Dan Nischan, lighting by Marcus Abbott and costumes by Elizabeth Cipollina. 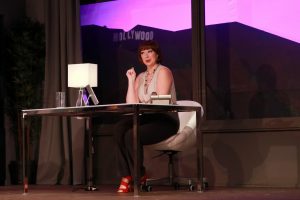 Members of the press are welcome after September 28th.  Please call ahead for tickets. 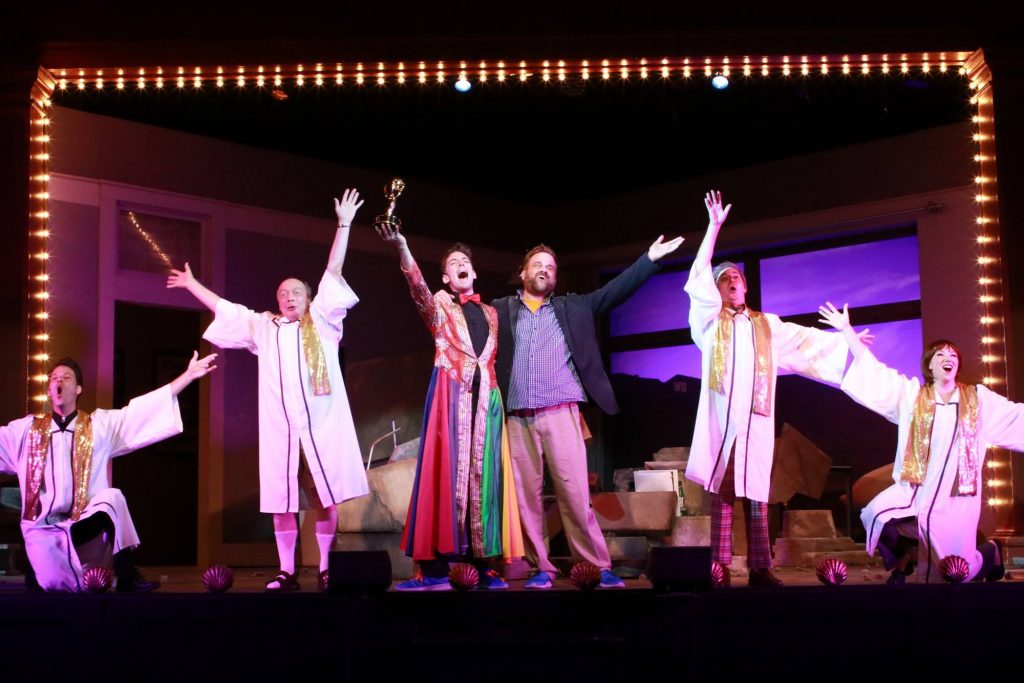 Check out our video for Ken Ludwig’s THE GAME’S AFOOT!

Actress Beverley J. Taylor returns to the Ivoryton Playhouse for a loving critique of a comic murder mystery with Connecticut ties. Our thanks to Overabove for producing video clips for all our productions.

After working for the Ivoryton Playhouse for 15 years, Taylor is delighted to return “simply as an actress” to play the much-maligned theatre critic Daria Chase. She looks back fondly on her time with the Playhouse, however, working in many roles and acting in several as well.

Asked to describe The Game’s Afoot, actress Beverley J. Taylor gives a sly grin. “There’s a quick murder, a little bit of body-hiding, a lot of slapstick comedy – thunder, lightning, screaming.” This comedy-thriller hits all the high notes of a murder mystery.

Set in William Gillette’s Connecticut Castle, this Edgar Allan Poe Award-winning play transports audiences to 1936 for a cast party that quickly turns deadly – and delightfully funny. Writer Ken Ludwig sets up both quick-witted jokes and an engrossing mystery, all in one night on the Ivoryton Playhouse stage. 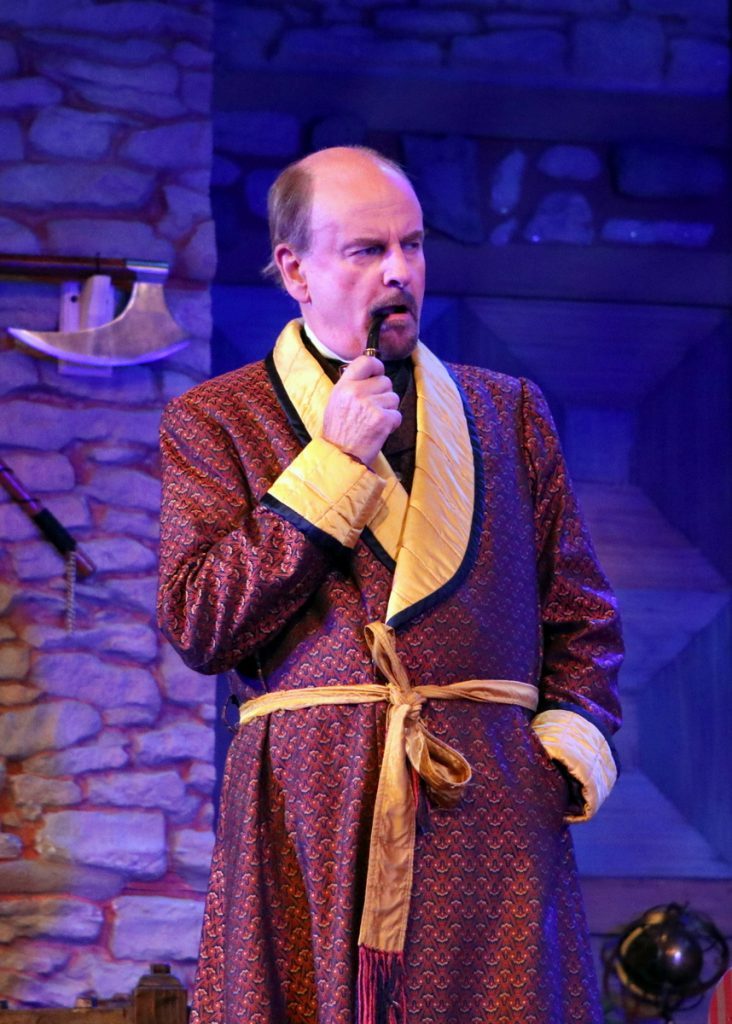 It’s Holmes for the Holidays!

It is December, 1936 and Broadway star William Gillette, admired the world over for his theatrical portrayal of Sherlock Holmes, has invited his fellow cast-members to his Connecticut castle for a weekend of revelry. But when one of the guests is stabbed to death, the festivities in this isolated house of tricks and mirrors quickly turn dangerous. Then it’s up to Gillette himself, as he assumes the persona of his beloved Holmes, to track down the killer before the next victim appears.

In the vein of the best “whodunit” murder mysteries, the plot takes many twists and turns. The dialogue is witty and face-paced; there’s suspense within the laughter and even when you think you’ve figured out who the bad guy is, you will start to question yourself when the plot takes an unexpected twist. 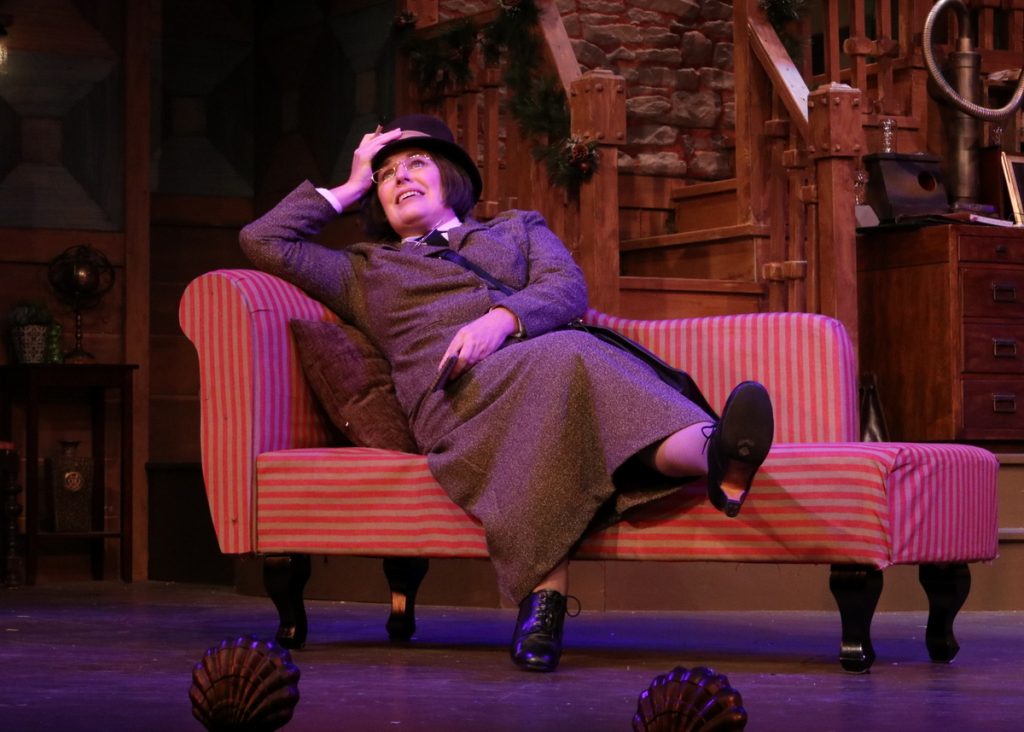 “From the intriguing opening mini play within a play to the surprise last scene a split second before final curtain, The Game’s Afoot gives you everything you love about great live theatre. Billed as a comedy thriller you will find yourself swept along for a wild and funny ride.” – Cleveland Examiner 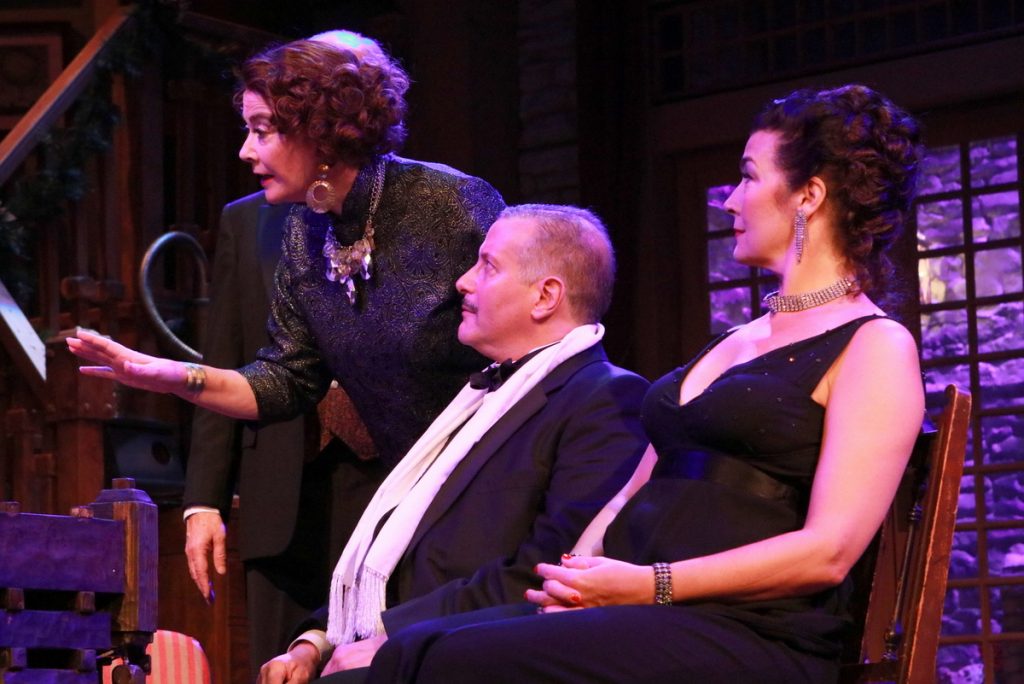 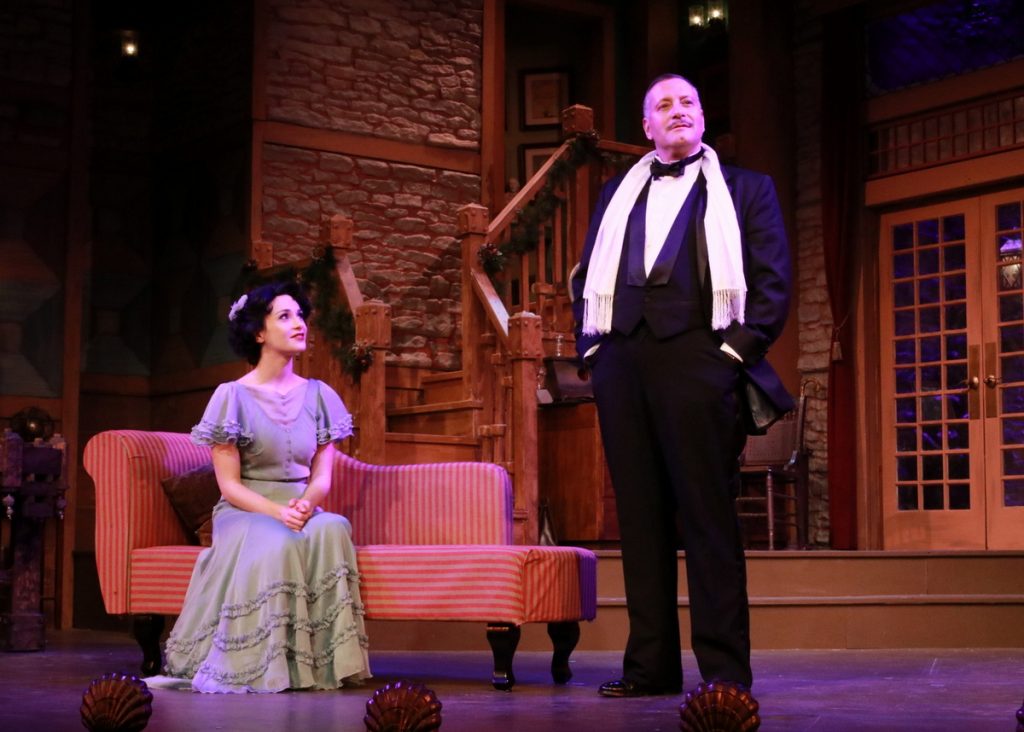 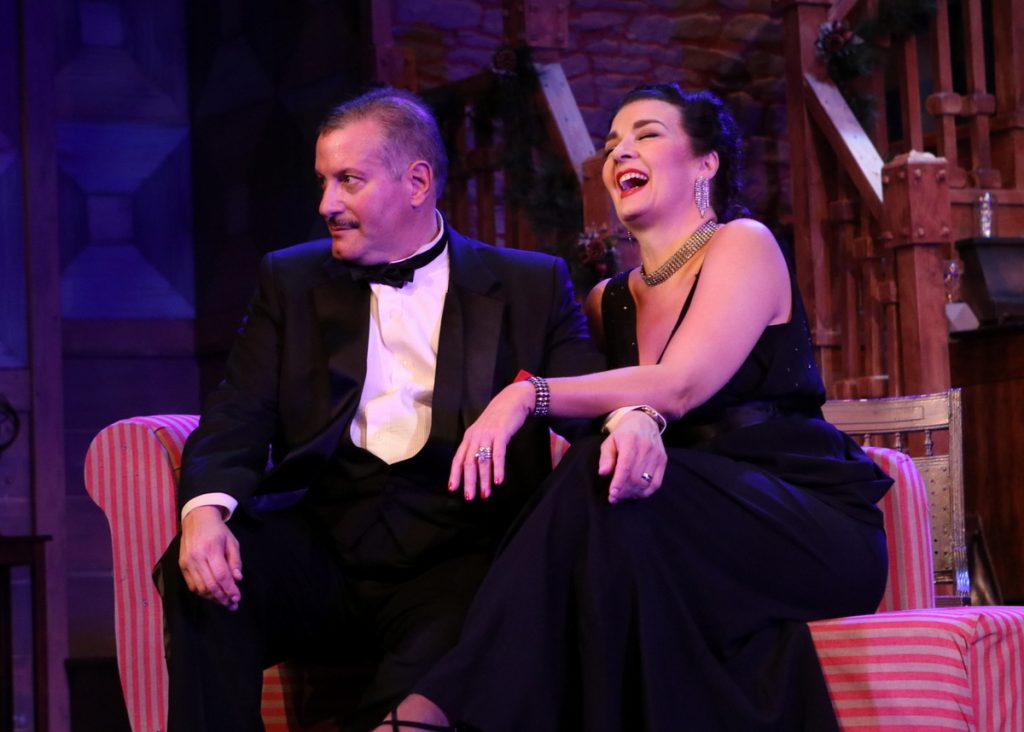