Thank you to all who came to see Always…Patsy Cline!

What a great start to our 2012 season!  Always…Patsy Cline closed Sunday, April 1 to another sold out crowd.  Every single show in this run received a standing ovation – 18 in all!  so, thank you!  Thank you to everyone who supported the Playhouse by attending this great show!

The Reviews Are In…
Our thanks to Lauren Yarger at Connecticut Arts Connection for this lovely review of our production of Always…Patsy Cline.

How Theater for Young People Could Save the World

Some of you might be thinking, “Oh lord, why do we need a day to celebrate actors being silly, wearing bright colors and singing obnoxiously at squirming kiddos and bored parents?”

But if you think that’s what Theatre for Young People is, you’re missing out on truly powerful, hilarious, bold, engaging, surprising theater that might just save the world.

Around the world artists are creating a new stripe of Theatre for Young People that combines the elegance of dance, the innovation of devised theater, the freshness of new plays, the magnetism of puppetry and the inciting energy of new musicals. Kids have access to more and more mature theatrical visions premiering from Washington, D.C.’s Kennedy Center to Atlanta’s Synchronicity Theatre to San Francisco’s Handful Players to Ireland to Adelaide to Kosovo to Cape Town.

These plays range from re-imagined fairy tales and adaptations of favorite books to brand-new plays and electric new musicals about everything from physics to bullying to The American Civil War.

But how could theater, especially theater for young people, really matter in a world as fraught and disparity-scattered as ours?

Not to sound overly grand (too late), but so much of the toxicity in this world comes from a collective draining of empathy. We don’t understand each other, and we don’t want to. But theater invites us — no, forces us — to empathize.

As my friend Bill English of San Francisco’s SF Playhouse says, theater is like a gym for empathy. It’s where we can go to build up the muscles of compassion, to practice listening and understanding and engaging with people that are not just like ourselves. We practice sitting down, paying attention and learning from other people’s actions. We practice caring.

Kids need this kind of practice even more than adults do. This is going to be their planet and they’ve got more time to apply that empathy and make a difference. Buddhist roshi Joan Halifax challenges us to actively and specifically teach children (and vote for presidents with) empathy. Why not take your child to the theater to do just that.

In fact “Take A Child to the Theatre Today” is the campaign theme of The International Association of Theaters for Young Audiences for the next three years.

If you take a child to the theater, not only will they practice empathy, they might also laugh uproariously, or come home singing about science, or want to know more about history, or tell you what happened at school today, or spend all dinner discussing music, or learn how to handle conflict, or start becoming future patrons of the arts.

On March 20th, take a child to the theater. Take them all the time. And don’t “sit back, relax, and enjoy the show.” Lean forward, engage and start changing the world for the better.

The Ivoryton Playhouse will be holding local auditions for Equity and non union actors for their summer shows the week of April 9th. Schedule is as follows:

THE LAST OF THE RED HOT LOVERS – auditions on April 9th from noon – 8pm – looking for 3 women ages 20 – 50. Scenes will be available on the Playhouse website – www.ivorytonplayhouse.org

OLIVER – auditions on Tuesday, April 10th from noon to 8pm – looking for singers of all ages OVER 12 ; and on Saturday, April 21st from 1pm – 4pm – auditions for children under 12

HAIRSPRAY– auditions on Wednesday, April 11th from noon to 8pm – looking for singers and dancers over 16.

All auditions are by appointment and actors should bring a picture and resume, prepare a song in the style of the show and be prepared to move. Check website for more details.

All auditions will be held at the Playhouse Rehearsal Studio, 24 Main Street, Centerbrook, CT 06409 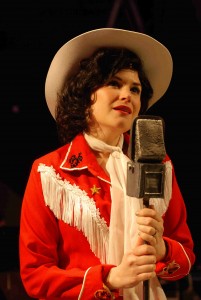 Come on in and Sit right down!
Always…Patsy Cline
at The Ivoryton Playhouse

Ivoryton:  In the town of Winchester in Virginia’s Shenandoah Valley, there is a gravestone that probably says it best: “Death Cannot Kill What Never Dies: Love.”

It is a tribute to the late, great singer Patsy Cline. Not many singers remain legends so long after their death, especially after a short career of slightly more than five years. Cline died tragically at age 30 on March 5, 1963, which was almost 49 years ago. Her music lives on partly through such wonderful stage tributes as Always… Patsy Cline, which opens the season at the Ivoryton Playhouse on March 14th.

Always…Patsy Cline has enjoyed great success all over the United States, including a successful run off-Broadway. It is more than a tribute to the legendary country singer. The show is based on a true story about Cline’s friendship with a fan from Houston named Louise Seger, who befriended the star in a Texas honky-tonk in l961, and continued a correspondence with Cline until her death.

The musical play, complete with down home country humor, true emotion and even some audience participation, includes many of Patsy’s unforgettable hits such as Crazy, I Fall to Pieces, Sweet Dreams and Walking After Midnight…27 songs in all.  The show’s title was inspired by Cline’s letters to Seger, which were consistently signed “Love ALWAYS… Patsy Cline.”

Playing Patsy Cline is Jacqueline Petroccia*, who also played her in a production at the Mac-Haydn Theatre in 2011 with spectacular reviews.

“Petroccia gives us a near perfect performance of what Patsy Cline would have sounded like in concert. There were times in the show when I really imagined I was watching Patsy Cline at the Opry” – Kevin Richards, DJ 107.7 WGNA

Laurie Dawn*, who will be playing Louise in this production, is no stranger to the Ivoryton Playhouse. Audiences loved her as M’Lin in Steel Magnolias and as Charlotte in Moon Over Buffalo.  Playhouse Executive/Artistic Director Jacqueline Hubbard directs this production with John DeNicola as musical director of the “Bodacious Bobcats” – the six piece foot stompin’ band.  Sets designed by William Stark, lights by Doug Harry, costumes by Lisa Marie Harry and hair by Joel Silvestro.

Always…Patsy Cline  opens on March 14th and runs thru April 1st for 3 weeks. Performance times are Wednesday and Sunday matinees at 2pm.

Evening performances are Wednesday and Thursday at 7:30pm, Friday and Saturday at 8pm. Tickets are $40 for adults, $35 for seniors, $20 for students and $15 for children and are available by calling the Playhouse box office at 860-767-7318 or by visiting our website at www.ivorytonplayhouse.org

Do you own any original Patsy Cline records on vinyl?

If so, bring your vintage album to the Ivoryton Playhouse Box Office any time during the run of Always…Patsy Cline and receive a coupon good for a free ticket to the next production in our 2012 season – The Graduate (opening April 18 – May 6).

Offer limited one per customer.  Cannot be combined with any other offer.