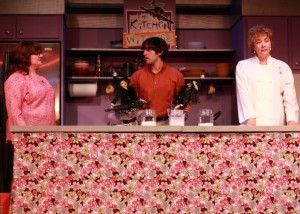 The Kitchen Witches opened Thursday, November 1 to uproarous laughter and a standing ovation.

An extra matinee has been added for Thursday, November 15 at 2:00pm. 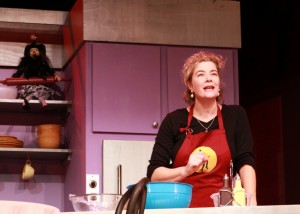 Join us to enjoy this hilarious show and soothe your storm soaked spirits!  Call or click to reserve your seats! 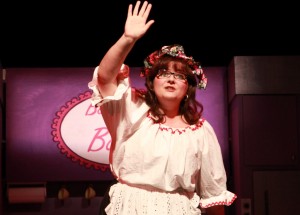 On Saturday, October 27, Ivoryton Playhouse Executive Director Jacqueline Hubbard will be honored by Vista – Vocational & Life Skills Center – with a Community Support Award.  This award is given each year to individuals and organizations who have demonstrated their support of Vista students through their active involvement in the program.

Helen Bosch, Executive Director for Vista writes, “You have made a difference in the lives of all involved with Vista.  Our members need partners in the community who can teach, guide, provide feedback and show patience.  Everyone associated with the Ivoryton Playhouse has demonstrated these qualities.”

The award will be presented at Vista’s Annual Meeting and Awards Ceremony at Water’s Edge Resort and Spa Saturday evening.

The Clash of the Cooking Show Divas!
The Kitchen Witches
at The Ivoryton Playhouse

Aprons are tied and ladles are readied for battle as the Ivoryton Playhouse suits up for the clash of the cooking show divas – THE KITCHEN WITCHES by Caroline Smith.  Winner of the 2005 Samuel French Canadian Playwrights Contest, this hilarious comedy is just the recipe for a night of fun and merriment!

Isobel Lomax and Dolly Biddle are two rival cable-access cooking show hostesses who have hated each other for 30 years, ever since Larry Biddle dated one and married the other.  When circumstances put them together on a TV show called The Kitchen Witches, the insults are flung harder than the food!

Dolly’s long-suffering TV-producer son Stephen tries to keep them on track, but as long as Dolly’s dressing room is one inch closer to the set than Isobel’s, it’s a losing battle, and the show becomes a rating smash as Dolly and Isobel top both Martha Stewart and Jerry Springer!

Canadian playwright Caroline Smith has whipped up a hilarious tale that’s sure to please even the fussiest palate.  Directed by Maggie Jennings, the show stars Beverley Taylor, Lisa Foss*, Carl Howell*, and Casey McKeon.  The set design is by Dan Nischan, lighting design by Marcus Abbott, and costumes by LisaMarie Harry.

THE KITCHEN WITCHES opens in Ivoryton on October 31st and runs through November 18th. Performance times are Wednesday and Sunday matinees at 2pm. Evening performances are Wednesday and Thursday at 7:30pm, Friday and Saturday at 8pm.   There will be a matinee on Thursday, November 15 at 2:00pm as well.  Tickets are $40 for adults, $35 for seniors, $20 for students and $15 for children and are available by calling the Playhouse box office at 860-767-7318 or by visiting our website at www.ivorytonplayhouse.org (Group rates are available by calling the box office for information.) The Playhouse is located at 103 Main Street in Ivoryton. 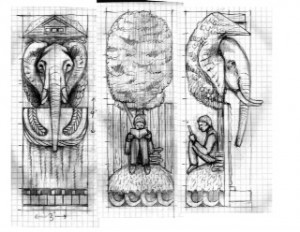 A detailed sketch of the proposed outdoor sculpture

The Ivoryton Playhouse has been standing for over 100 years –  even a 60ft tree falling on our doorstep can’t stop us!

After much searching, we have finally found the right artist to create a beautiful, meaningful sculpture out of the stump of the 60ft pine tree that fell during last year’s Hurricane Irene.

Kris Connors, an artist from nearby Clinton, came forward with an amazing concept and beautiful sketches to transform the broken trunk into a stunning piece of art. The piece will be 3ft wide by 9ft high and will feature the history of Ivoryton and themes of live theatre.

The front will be carved into an elegant elephant head framed with a representative of the outside of the Playhouse roof. Finely detailed flowing theatre curtains are draped below and piano keys will also be featured on the bottom. The back, facing the Playhouse, will feature an actor sitting under a tree, script in hand learning his lines. Hundreds of actors over the years used the now fallen pine tree as a quiet, meditative space to learn lines and practice the craft before taking the Ivoryton stage.

The design is just perfect to become a permanent feature on the grounds of the Ivoryton Playhouse. It elegantly brings together all the significant and meaningful elements of the 100 year old building and the history of the village of Ivoryton.

The carving will be treated with a deck/fence wood preservative containing sun, water, mildew and insect protection. This will be reapplied every two years to keep the wood fibers strong and healthy.  The carving will start in November of 2012 and will take around 3 weeks to complete.

Play your part in creating this permanent outdoor sculpture for Ivoryton

This custom sculpture will be at the heart of Ivoryton for decades to come and we thank you for contributing to this special one-off project.

About the artist: Kris Connors said about her business, “Custom Wood Carvings & More”, that it ” unintentionally started in 2004 when I bought a chainsaw with a carving set up and began experimenting with large scale wood carvings. Initially, I wanted to do it for my own personal creative outlet with no intention of ever selling anything. Eventually, people began asking me “Hey, can you make this or that?” and the ball has been rolling ever since.”   www.customwoodcarvings.com

Thank you for considering a gift to make this transformation happen!

Thank you for making “Breaking Up Is Hard To Do” one of our biggest hits of the season!

“BREAKING UP IS HARD TO DO:” IS A NEIL SEDAKA TREAT
BONNIE GOLDBERG – 10/4/12
Theatre Critic for Middletown Press

Remember back to the 1960’s when the Bozo the Clown Punching Bop Bag, with bright red hair, squeaky nose, bop zone and sand filled base, was all the rage.  You vent your stress and frustration by hitting it down and watching it pop right back up again, ready for another round.  How wonderful it would be if people could be that resilient and could bounce back as easily when they are knocked down by disappointment.

Just ask Marge Gelman whose fiancé left her at the altar.  She justifiably was devastated and depressed and despondent.  So it’s her B.F.F, best friend forever, Lois to the rescue and a three-day weekend at Esther’s Paradise Resort in the Catskill Mountains of New York as a quick fix, a temporary Band-aid, to inject a dose of momentary joy.

To journey with Marge and Lois, come along to the Ivoryton Playhouse for a musical injection of Neil Sedaka tunes in “Breaking Up Is Hard to Do,” with book by Erik Jackson and Ben H. Winters, until Sunday, October 14.

Leah Monzillo’s Marge and Sheila Coyle’s Lois jump into the bevy of activities that Esther (Melanie Souza) and her resort are famous for as they try to heal one broken and bruised heart.

The girls quickly find themselves swept up with hunky head singer Del Delmonaco (Christopher DeRosa) who has an ego as big as the resort’s mountain range.  Initially he seems a good choice to get Marge out of her despair but his callousness only makes the situation worse, when she realizes her mistake.  Enter Gabe (Scott Scaffidi), a sincere guy who is secretly writing all of Del ’s songs and letting Del take all the credit.  Gabe sees Marge for the sweetheart she is and happiness is clearly around the corner.

A happy ending is also forecast for the club’s top comic Harvey (R. Bruce Connelly) who discovers, amidst all the jokes and smaltz, that he loves Esther.  Jacqueline Hubbard directs the romantic romp that is stuffed with Sedaka songs like “Where the Boys Are,” “Stupid Cupid,” “Calendar Girl,” “Solitaire,” “Laughter in the Rain” and “Love Will Keep Us Together,” all under the musical direction of John S. DeNicola and Vic Perpetua.

Cheer for Marge to recover her romantic equilibrium and once again find love, with the help of her best bud Lois and the music of Neil Sedaka as her lucky charms.

Scarecrow making at the Playhouse

You know when Fall comes around it’s time for the scarecrows to come out in Essex.  The Playhouse is playing along and even recruited Jacqui’s Mum visiting from England to help! 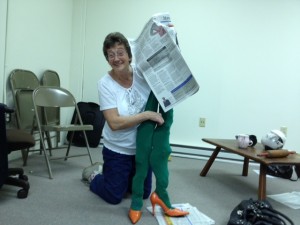 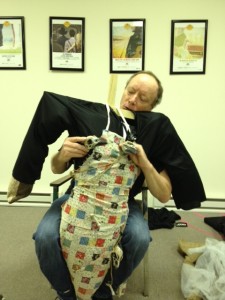 Bruce Connelly, currently starring in "Breaking Up Is Hard To Do" joins in the fun 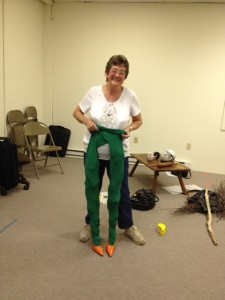 Visit Essex, Ivoryton and Centerbrook and vote for your favorite scarecrow! 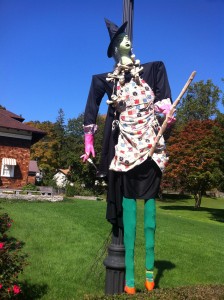 The finished product is on display at The Ivoryton Playhouse!