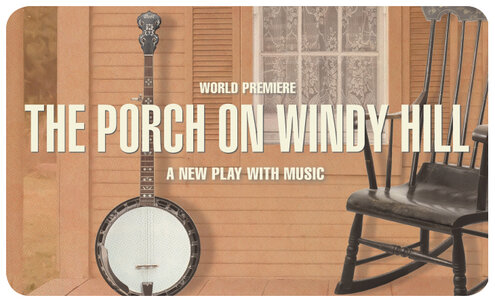 The Porch on Windy Hill 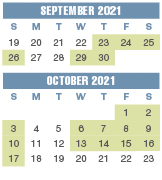 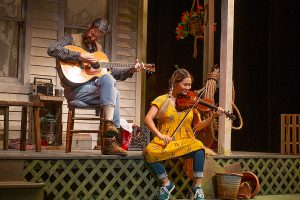 A new play with music. Writer-Director Sherry Lutken and actor-musicians Lisa Helmi Johanson, Morgan Morse and David Lutken have created an original musical set to open at the Ivoryton Playhouse this fall: a new, heartfelt story about traditional American Music and a Not-So-Traditional, yet thoroughly American family. A young, Classical violinist and her folk-song-collector boyfriend escape their 2021 “long winter’s night” of quarantine/isolation in Brooklyn to the mountains of western North Carolina. They’re searching for some of Appalachian music’s famous sources, inspirations and influences, authentic and un-adulterated. 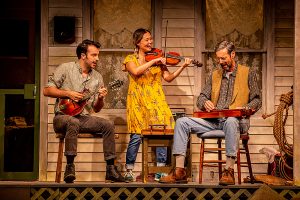 The tunes are Old Time, Bluegrass and Country Blues fiddle, guitar, banjo and mountain dulcimer melodies from deep in the USA’s DNA, with songs like Down In The Valley, Green Corn, Blackberry Blossom, Sail Away Ladies and more. Their journey takes a surprising turn when they stumble upon exactly what they’ve been looking for— and all the unexpected complexity, discord, difficulty, heartbreak, joy, and strange new harmony that goes with him. 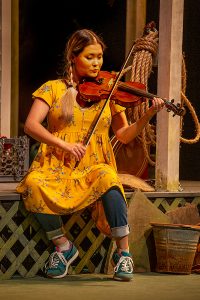 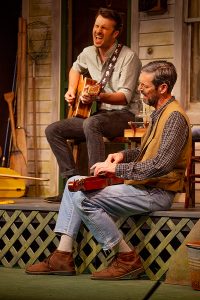 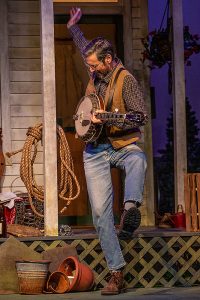 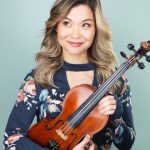 Lisa Helmi Johanson* (Mira) is a singer/actor/musician/producer who has a passion for developing new works, authentic storytelling, and intentionality in representation as a means to further the work of racial justice and social equity. Off-Broadway/NYC: Avenue Q, Einstein’s Dreams (Original Cast), The Drowning Girls, Three Sisters, Women Beware Women, Rescue Rue. Tours: Fiasco’s Into the Woods, Avenue Q. Select Regional: Anything Goes (Arena Stage), Vietgone (Denver Center), The Chinese Lady (Milwaukee Rep; Best Actress award – Milwaukee Broadwayworld), Amadeus (Syracuse Stage), Once (Cape Playhouse), Waterfall (5th Avenue Theatre & Pasadena Playhouse), Priscilla… (Ogunquit & Gateway Playhouses), 4,000 Miles (St. Louis Rep.), Taming of the Shrew (VA Stage). Film/TV: Law & Order: SVU, Z-Rock (IFC), The Onion News Network. Lisa has spanned out to writing and producing during the pandemic and her first co-written piece, Kim Loo Gets a Redo (IG:@kimlooredo), was selected for the 2021 Ice Factory Festival at the New Ohio Theater in NYC in which she performed in while eight months pregnant. She and her husband are also close to launching a sitcom podcast called Preschool (IG:@preschoolsitcom; FB: Preschool the Podcast) in which she co-directs, acts, and sound designs. She is active in racial justice work through Interfaith Justice Queens/Court Square Justice as well as serving on the AAPI Advisory Council for the DA of Queens, NYC. Micah 6:8 For my J&J. IG:@hurricanehelmi www.lisahelmijohanson@gmail.com 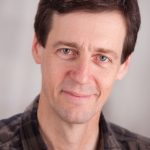 David M. Lutken* (Edgar) David is excited to be back at The Ivoryton Playhouse where he was last seen as Woody Guthrie in Woody Sez. He also appeared here in The Road: My Life With John Denver; served as Music Director for Stand By Your Man, and played Johnny Cash in Ring of Fire.  BROADWAY: Inherit the Wind; Ring of Fire; The Civil War; The Will Rogers Follies.  OFF-BROADWAY: Woody Sez (Outer Critics’ Circle, Off-Broadway Alliance & Drama League Best Musical nominations) Southern Comfort; Stars in Your Eyes; Winter Man; The Portable Pioneer and Prairie Show.  N.Y. CITY OPERA: Paul Bunyan  LONDON: Woody Sez (Evening Standard Best Musical nomination); Dark of the Moon; Bonnie and Clyde; A Month In The Country.  REGIONAL: Our Town; Man of La Mancha; Big River; Elmer Gantry; Finian’s Rainbow; Fire On The Mountain; Lost Highway; Buddy; Pump Boys and Dinettes; The Love List; The Man Who Came to Dinner; On Golden Pond; Mark Twain’s River of Song, and many others.  He has performed at Carnegie Hall, Lincoln Center, The 92nd St Y, at Cooper Union (with Ted Sperling’s ‘Master Voices’), Nashville’s  Ryman Auditorium, with the North Carolina Symphony and the Baton Rouge Symphony Orchestra, on NPR, the BBC, Polskie Radio Troika, Voice Of America, and The Louisiana Hayride. With his original show, “Woody Sez: The Life & Music of Woody Guthrie”, he and his company have toured Europe, the British Isles, the US, the Middle East, and China. David won the Helen Hayes and the Joseph Jefferson Best Actor award for his portrayal of Woody Guthrie. 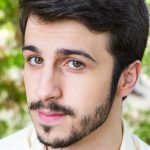 Morgan Morse* (Beckett) is an actor, musician, and writer originally from Ansonia, Connecticut. He is incredibly honored and excited to be back at the Ivoryton Playhouse, and to be part of bringing this new piece of theatre to life. Other credits include Once, Godspell, South Pacific and Stand By Your Man here at Ivoryton, Once at the Cape Playhouse, Hootenanny the Musicale at the Milwaukee Repertory Theater, Southern Comfort at the Public Theater in NYC, and Ring of Fire everywhere from Houston, TX to Vienna, Austria. In addition to theatre, he writes and performs original music which you can find online at soundcloud.com/morgan-morse, and during the past year he made a TikTok account (@themorsecoda) where he now has over 83,000 followers (because life is absurd, and nothing makes sense anymore!). He’d like to thank his parents, for lots of things, but especially for letting him crash with them for a much longer period of time than anyone anticipated during the surreal experience that was 2020. Much thanks to David, Sherry, and Lisa for being the best collaborators anyone could ask for, and much thanks to Jacqui and everyone at the Playhouse for continuing to make live theatre happen! 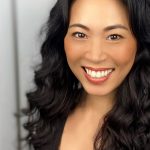 EJ Zimmerman* (Mira u/s)  Ivoryton debut! Enormous gratitude to Lisa, Sherry, David, and Morgan for inviting me to join them in telling this special story. For Mrs. Vosough, who taught me how to play the violin. #REPRESENTATIONMATTERS

David and I first came to the Playhouse with “Ring of Fire” ten years ago (August and September, 2011—interrupted by Hurricane Irene, for those who love Ivoryton trivia). We’ve been fortunate to frequent the stage here many times since —“Stand By Your Man”, “The Road: My life with John Denver”, “The Million Dollar Quartet”, “Woody Sez”.

After the pandemic began, Ivoryton’s Artistic Director, Jacqui Hubbard, encouraged us to write a “play-with-music” for our tenth anniversary production. Six months ago, still in the depths of isolation, the lightning bolt of an idea struck while we were driving (fifty miles to the grocery store in Mississippi—long story).

The inspirations were a combination of terrible events in the news of the day, and several long-simmering thoughts and un-articulated concepts about the crosscultural integration and power of American music. The choice of Lisa Helmi Johanson (who immediately informed us that she was 5 months pregnant) and Morgan Morse as co-creators in the cast followed instantaneously, and we were quite chuffed that they wanted to dive in.  We had met Morgan, another frequent Ivorytonian, when he drove all the way from Ansonia to audition for the Tammy Wynette show in 2015. He got the part! (More trivia, Morgan has childhood memories of being at the Playhouse when his father, Peter Morse performed in “A Woman of a Certain Age”). Morgan and Lisa had performed together in “Once” (at The Cape Cod Playhouse). Lisa and David met in Milwaukee. He was in one theater playing Mark Twain, and having his weekly hootenannies. She was in another—acting in a beautiful play called “The Chinese Lady”—and stopped in one Sunday evening, fiddle in hand, ready to
jump into the musical fray. It has been truly thrilling to put this wonderfully talented group together, and to experience the birth of this play-with-music—even more so because Lisa’s daughter arrived in August and has gained several pounds since we started rehearsals. “The Porch On Windy Hill” is Sherry, Lisa, Morgan and David’s first collaborative play.

Check back here for more photos and video clips! 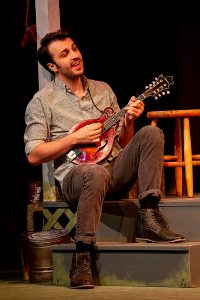 The Porch on Windy Hill A world premiere of a new play with music The Ivoryton Playhouse builds on its growing reputation as a home for new and developing works when it presents the original play with music THE PORCH ON WINDY HILL, opening September 23.

Featuring longtime Playhouse favorite David Lutken*, the musical play, directed by Sherry Lutken, also stars Lisa Helmi Johanson*, Morgan Morse* and EJ Zimmerman* at selected performances. This talented band of musicians wrote this piece during the roller coaster ride of 2020 and 2021. They bring to the work their own experiences in the world of country and bluegrass music and Lisa’s own experiences as a bi-racial Korean American. 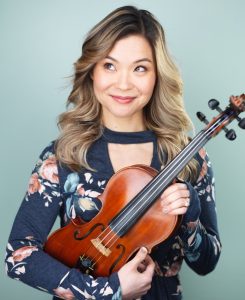 THE PORCH ON WINDY HILL is the heartfelt story of an Appalachian family’s roots and the music that binds them together. When Edgar’s estranged granddaughter, Mira, and her boyfriend Beckett, descend on the old family home, Edgar must face his past prejudices in order to rekindle their relationship. Featuring traditional bluegrass favorites “Birmingham Jail,” “Down in the Valley,” “Blackberry Blossom,” “Little Log Cabin in the Lane,” and “Columbus Stockade Blues,” among many others, this sharply observed show deepens our understanding of what it means to be an American, and in a truly American way, uses music to build bridges and remind us of our shared humanity.

The play has sets designed by Martin Marchitto; costumes by Elizabeth Saylor; lighting design by Alan Piotrowicz; and sound by Tate R. Burmeister.

THE PORCH ON WINDY HILL opens at the Ivoryton Playhouse on Thursday, September 23rd and runs through Sunday, October 17th, 2021. Performance times are Wednesday and Sunday matinees at 2:00 pm; evening performances are Wednesday and Thursday at 7:30 pm, Friday and Saturday at 8:00 pm. There will be one Thursday matinee at 2:00 pm on September 23rd.

The safety of our audience is our primary concern. We have socially distanced our capacity so that there are only 140 seats in the theatre for your comfort and protection. Tickets are $55 for adults, $50 for seniors, $25 for students and are available by calling the Playhouse box office at 860.767.7318. Tickets are not available online. Visit our website at http://www.ivorytonplayhouse.org for more information. (Group rates are available by calling the box office for information.) The Playhouse is located at 103 Main Street in Ivoryton.

*Denotes member of Actors Equity Because of socially distanced seating, we will only have 2 press seats available at each performance for the first two weeks. Please call Sue McCann at 860.767.7318 to reserve a seat.

Appalachian music is the music of the region of Appalachia in the Eastern United States. It is derived from various European and African influences, including English ballads, Irish and Scottish traditional music (especially fiddle music), hymns, and African-American blues. Group singing, call-and-response based melodies, a celebration of improvisation, and a deep devotion to rhythm were all brought into Appalachia by African Americans. Along with their singing styles, these musicians also brought a few unique instruments.