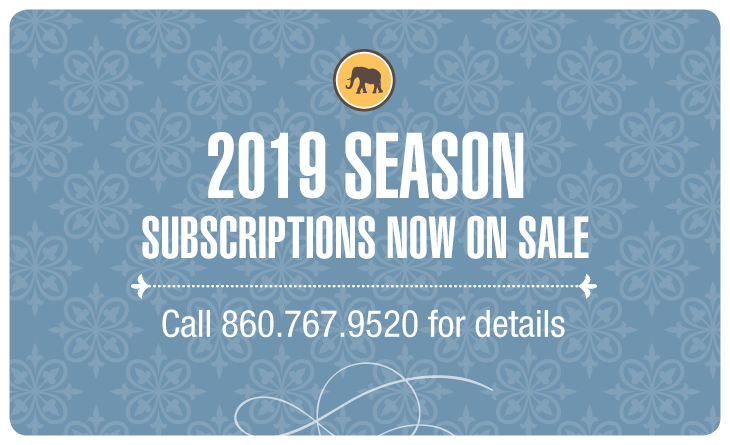 2019 SEASON SUBSCRIPTION INFORMATION AND PRICES ARE BELOW

If you fell in love to the music of Burt Bacharach, then you won’t want to miss this nostalgic romantic musical comedy. Joe and Lacey were high school sweethearts who drifted apart when they attended different colleges after graduation. Years later, their paths cross again as Joe devises a clever plan to win Lacey back… with the help of one Burt Bacharach. Featuring the classics: “What the World Needs Now,” “Walk On By,” “I Say A Little Prayer,” and many more.

A progressive white couple’s proud liberal sensibilities are put to the test when their daughter brings her black fiancé home to meet them in this fresh and relevant stage adaptation of the iconic film, Guess Who’s Coming to Dinner. Blindsided by their daughter’s whirlwind romance and fearful for her future, Matt and Christina Drayton quickly come to realize the difference between reading about and supporting a mixed-race couple in your newspaper and welcoming one into your family–especially in 1967. It’s not long before a multi-family clash of racial and generational difference erupts. At the end of the day, will love prevail?

Godspell is the first major musical theater hit from three-time Grammy and Academy Award winner Stephen Schwartz (Wicked, Pippin, and Children of Eden). Loosely based around the Gospel of St. Matthew, the show follows a company of characters who unite to become a community through teachings of love, kindness, and acceptance. Led by the international hit, “Day by Day,” Godspell features a parade of beloved songs, including, “Prepare Ye the Way of the Lord,” “Learn Your Lessons Well,” “All for the Best,” “All Good Gifts,” “Turn Back, O Man” and “By My Side.”

Over 60 million people worldwide have fallen in love with the characters, the story and the music that make Mamma Mia! the ultimate feel-good show! Set on a Greek island paradise, the story-telling magic of ABBA’s timeless songs propels this enchanting tale of love, laughter and friendship, creating an unforgettable show. A mother. A daughter. Three possible dads. And a trip down the aisle you’ll never forget!

“There was a cabaret and there was a master of ceremonies and there was a city called Berlin in a country called Germany. It was the end of the world … and I was dancing with Sally Bowles and we were both fast asleep.” So begins the international classic musical and winner of 8 Tony awards – Cabaret. Join us at the Kit Kat Club as the Emcee takes us back to those tumultuous times with unforgettable musical numbers including, “Willkommen,” “Cabaret,” and “Two Ladies.” A Broadway classic. Winner of eight Tony Awards in 1967 and four in 1998.

Shear Madness is one of the most popular productions in the world, delighting audiences with its unique blend of madcap improvisation and spine-tickling mystery. This unique comedy-whodunit takes place today in the “Shear Madness” hairstyling salon and is chock full of up-to-the-minute humor. A murder is committed and the audience gets to spot the clues, question the suspects, and solve the mystery. Voted “Best Comedy of the Year” seven times by the Boston Globe and “Best Play of the Year” by the Chicago Sun-Times and the Philadelphia Enquirer, Shear Madness has also received the Raven Award from the Mystery Writers of America and has been inducted into the Comedy Hall of Fame, the first play ever to receive that accolade.

David Lutken and his trusty band of musicians return to the Playhouse in a show featuring Woody Guthrie – the original folk hero and an iconic American troubadour. Tap your feet and sing along with Woody Sez in this uplifting musical portrait. You will be transported through his fascinating life with moving ballads and energetic foot-stompers like “This Land is Your Land,” “The Ballad of Tom Joad,” “Pastures of Plenty” and “This Train is Bound for Glory” in this incredible, award-winning musical journey.

Subscriptions can be purchased by downloading the forms below and sending by mail.  We offer 18 possible series during our season. On the form below, please circle the Series that you’d like for Season 2019, complete all of the information and mail to us with payment. Remember that, for a Series, you must stay within the same row of dates.

You will be able to switch any single dates that don’t work for you after February 20, 2019.