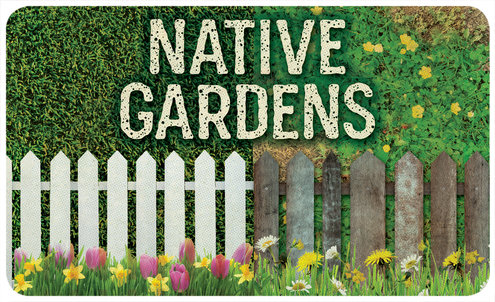 A fence divides two backyards. An older white couple has lived for a long time on one side of the fence. On the other side, a young Latino couple has just moved in. Both couples are avid gardeners. One garden has lush grass and very symmetrical garden beds. The other is unkempt, natural and organic. Gardens and cultures clash, turning friendly neighbors into feuding enemies in this hilarious new comedy of good intentions and bad manners. 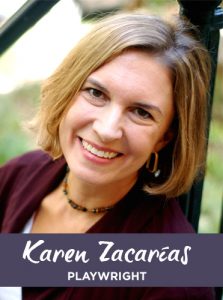 Karen Zacarías award-winning plays include the sold-out/extended comedy THE BOOK CLUB PLAY, the sold-out world premiere drama JUST LIKE US (adapted from the book by Helen Thorpe) at Denver Theater Center, the Steinberg –citation award play LEGACY OF LIGHT , the Francesca Primus Award winning play MARIELA IN THE DESERT,  the Helen Hayes Award winning play  THE SINS OF SOR JUANA , the adaptation of Julia Alvarez’s HOW THE GARCIA GIRLS LOST THEIR ACCENTS. Karen also has a piece in the Arena Stage premiere of OUR WAR.  Her TYA musicals with composer Debbie Wicks la Puma include JANE OF THE JUNGLE, EINSTEIN IS A DUMMY, LOOKING FOR ROBERTO CLEMENTE, CINDERELLA EATS RICE AND BEANS, FERDINAND THE BULL, and FRIDA LIBRE. Her musical CHASING GEORGE WASHINGTON premiered at The Kennedy Center for Performing Arts and went on a National Tour.  Her script was then adapted into a book by Scholastic with a foreword by First Lady Michelle Obama.

Karen is currently working on the adaptation of Edith Wharton’s THE AGE OF INNOCENCE, a drama for Oregon Shakespeare Festival, and a Brazilian themed Oliver Twist musical: OLIVERIO: A BRAZILIAN TWIST ON DICKENS for the Kennedy Center. Her libretto of THE SUN ALSO RISES for the Washington Ballet received accolades in the New York Times and she is currently writing the libretto for THE LEGEND OF SLEEPY HOLLOW with Washington Ballet artistic Director Septime Webre. She is proud to be currently commissioned to write new plays for Arena Stage, Cincinnati Playhouse, Ford’s Theater, Adventure Theater, and First Stage.

Karen is the first playwright-in-residence at Arena Stage in Washington, DC and has taught playwriting at Georgetown University. She is the founder of Young Playwrights’ Theater, an award-winning theater company that teaches playwriting in local public schools in Washington, DC. YPT won the 2010 National Arts and Humanities Youth Program Award from the White House as one of the most innovative arts programs in the nation. The YPT curriculum is currently being used in public schools in DC, VA, MD, New Orleans, Detroit, and Texas and is published on Amazon as “WRITE TO DREAM.”

Karen is represented by the Graham Agency and published by Dramatic Publishing. Karen is fluent in English and Spanish and highly proficient in Danish and French. She has BA with distinction from Stanford University and a Masters in Creative Writing from Boston University.  Born in Mexico, Karen now lives in Washington D.C. with her husband and three children.