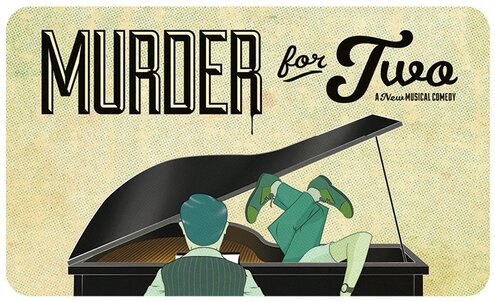 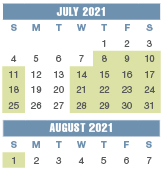 Want to see MURDER FOR TWO in the comfort of your own home? Well, now you can!

Our “live capture” of this hilarious and madcap production is now available to purchase as a live stream. Available for viewing until August 1st only.

Cost is $20. Order online and you will be emailed a YouTube link to gain exclusive access to the show as recorded on Wednesday, July 7, 2021.

Our thanks to Option A for producing this great video clip for us!

Everyone is a suspect in MURDER FOR TWO – one actor is the detective, the other plays all 13 suspects and they both play the piano! A zany blend of classic musical comedy and madcap mystery, this 90-minute whodunit is a highly theatrical duet loaded with killer laughs. 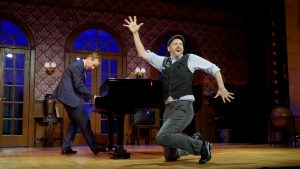 MURDER FOR TWO is the perfect blend of music, mayhem and murder! In this hilarious 90-minute show, 2 performers play 13 roles—not to mention the piano—in a witty and winking homage to old-fashioned murder mysteries. The New York Times calls it “INGENIOUS! A snazzy double-act that spins out a comic mystery animated by funny, deftly turned songs.” You won’t want to miss this killer musical comedy!

THE STORY: Officer Marcus Moscowicz is a small town policeman with dreams of making it to detective. One fateful night, shots ring out at the surprise birthday party of Great American Novelist Arthur Whitney and the writer is killed…fatally. With the nearest detective an hour away, Marcus jumps at the chance to prove his sleuthing skills—with the help of his silent partner, Lou. But whodunit? Did Dahlia Whitney, Arthur’s scene-stealing wife, give him a big finish? Is Barrette Lewis, the prima ballerina, the prime suspect? Did Dr. Griff, the overly-friendly psychiatrist, make a frenemy? Marcus has only a short amount of time to find the killer and make his name before the real detective arrives…and the ice cream melts! 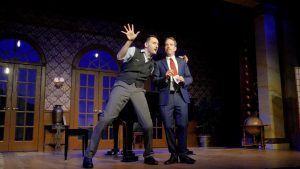 Seating is limited so book early to avoid disappointment.  Prices:  $55 adult; $50 senior; $25 students of all ages 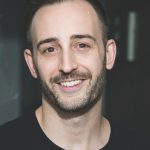 JOE KINOSIAN is the composer and co-bookwriter of Murder For Two, which had its World Premiere at Chicago Shakespeare Theater, receiving the Joseph Jefferson Award for Best New Musical and earning Joe a nomination for Best Leading Actor. Since its off-Broadway run, there have been many acclaimed productions of Murder For Two across the country and around the world. It Came From Outer Space, Joe’s next musical with collaborator Kellen Blair, is currently slated for Chicago Shakespeare’s next season. Regional acting credits include Two Pianos, Four Hands, An Act of God, Dirty Blonde, and the title role in The Nerd. Joe was also the arranger for, and performed in, The Gorgeous Nothings: In Concert, produced by Life Jacket Theater, which sold out its run at Joe’s Pub and was subsequently broadcast by Playbill.com. His work has appeared at The Kennedy Center, Lincoln Center, and on Broadway at the Theater World Awards. 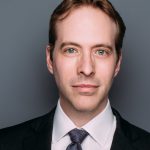 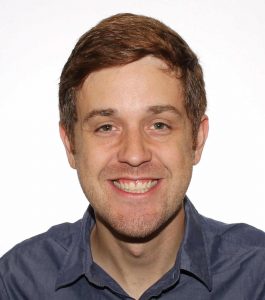 Kellen is the Drama Desk nominated co-creator of Murder For Two (Off-Broadway: Second Stage Theatre and New World Stages. World premiere: Chicago Shakespeare Theatre). The show is currently touring internationally (with productions in Tokyo, Shanghai, Buenos Aires, and the UK). Kellen and co-writer Joe Kinosian are the recipients of the Joseph Jefferson Award for Best New Musical Work in Chicago (2011) and the ASCAP Foundation Mary Rodgers / Lorenz Hart Award (2013). Their work has been showcased on Broadway, the Kennedy Center, and theaters across the country; they’re currently developing an original musical farce with Second Stage Theatre in NYC. Kellen is also the lyricist of Scrooge in Love (42nd Street Moon, 2015 and 2016), for which he and composer Larry Grossman won the 2015 Bay Area Critics Award for Best Score. Updates, videos, song demos, and sheet music can be found at kinosianandblair.com. 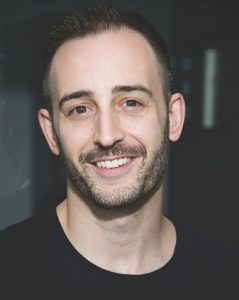 Joe is the co-recipient of Chicago’s Joseph Jefferson Award recognizing Murder for Two as Best New Musical following its record-breaking run at Chicago Shakespeare Theater; Joe was also nominated for Best Actor as The Suspects. Murder for Two had its Off-Broadway premiere at Second Stage Uptown, going on to a year-long run at New World Stages. Joe’s work with Kellen Blair has been showcased at The Kennedy Center, The York Theater, and on Broadway at the Theatre World Awards. Joe received the ASCAP Foundation Mary Rodgers/Lorenz Hart Award and the Harrington Award from the BMI Workshop. Joe also appeared in Dirty Blonde with Emily Skinner (Hangar Theater) and the NYC premiere of Dear Edwina Off-Broadway. kinosianandblair.com 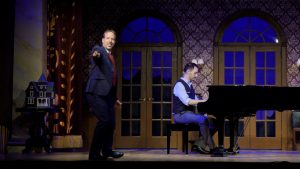 Ivoryton – The Ivoryton Playhouse will open its doors for a 5 play season on July 8, 2021. It’s time to get out and share some music and laughter and we’ll be providing it with a liberal dash of blood with MURDER FOR TWO!

MURDER FOR TWO, by Kellen Blair & Joe Kinosian, is the perfect blend of music, mayhem and murder! In this hilarious 90-minute show, 2 performers play 13 roles—not to mention the piano—in a witty and winking homage to old-fashioned murder mysteries. The New York Times calls it “INGENIOUS! A snazzy double-act that spins out a comic mystery animated by funny, deftly turned songs.” You won’t want to miss this killer musical comedy! 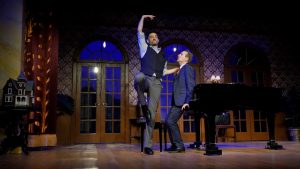 MURDER FOR TWO was developed at The Adirondack Theatre Festival and 42nd Street Moon. Chicago Shakespeare Theater presented the World Premiere Production in May, 2011, which was extended 4 times and ran for more than 6 months. Kinosian and Blair were recognized with a 2011 Joseph Jefferson Award for Best New Musical
Everyone is a suspect in MURDER FOR TWO – Ian Lowe*, who was last seen in Ivoryton in THE WOMAN IN BLACK, plays the detective, and Joe Kinosian* plays all 13 suspects and they both play the piano! Joe also co-wrote this smart, funny musical and we are thrilled to have him perform his tour de force in Ivoryton.

A zany blend of classic musical comedy and madcap mystery, this 90-minute whodunit is a highly theatrical duet loaded with killer laughs. Don’t miss this opportunity to step back into life and laughter at the Ivoryton Playhouse! 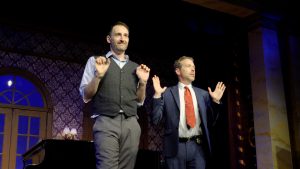 The show is directed and choreographed by Wendy Seyb, the set is designed by Martin Marchitto, lighting by Marcus Abbott and costumes by Elizabeth Cipollina.
MURDER FOR TWO opens at the Ivoryton Playhouse on July 8 and runs through August 1, 2021. Performance times are Wednesday and Sunday matinees at 2pm. Evening performances are Wednesday and Thursday at 7:30pm, Friday and Saturday at 8pm. There will be one Thursday matinee on July 8.

The safety of our audience is our primary concern. Face masks are required at all times in the theatre. There is no intermission and no concessions will be sold. Eating and drinking are not allowed in the theatre. We have socially distanced our seats so that there are only 96 seats in the theatre for your comfort and protection. 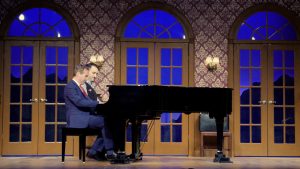 Because of socially distanced seating, we will only have 2 press seats available at each performance for the first two weeks. Please call Sue McCann at 860.767.7318 to reserve a seat. 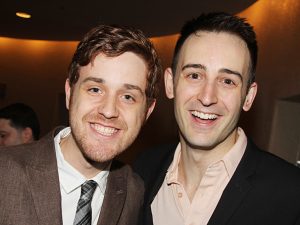 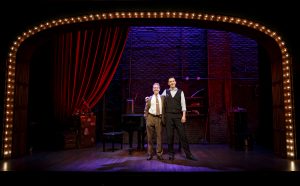 "Murder For Two" was developed at The Adirondack Theatre Festival and 42nd Street Moon. Chicago Shakespeare Theater presented the World Premiere Production in May, 2011, which was extended 4 times and ran for more than 6 months. Kinosian and Blair were recognized with a 2011 Joseph Jefferson Award for Best New Musical. Murder For Two opened at Second Stage Theatre’s uptown home, the McGinn/Cazale Theatre, in July, 2013. It was extended twice due to popular demand. The Second Stage production transferred to New World Stages, where performances began on October 23, 2013 and played its final performance on June 29, 2014. The National Tour launched at Arizona Theatre Company in Tucson on November 29, 2014 and played its final performance at the Straz Center for the Performing Arts in Tampa, FL on May 1, 2016.