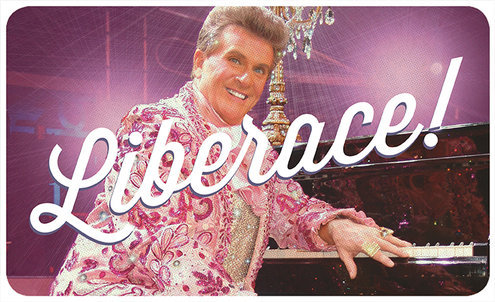 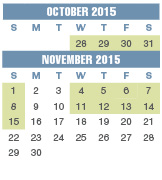 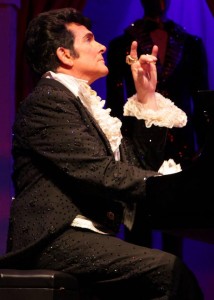 Liberace! is a moving and highly entertaining tribute to the performer and musician famous for his charm, glitz, and glamour. Liberace! relives the highs (and lows) of his prolific life, with a rollicking piano score spanning classical and popular music from Chopin to “Chopsticks,” and Rachmaninoff to Ragtime. 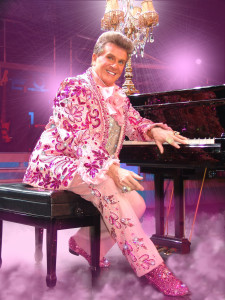 With thanks and gratitude to Daryl Wagner for providing costumes and accessories for this production. 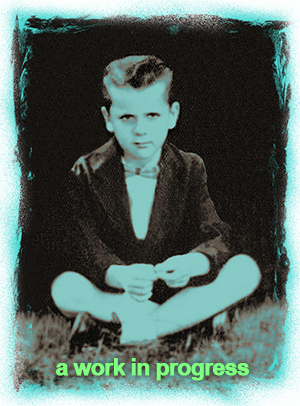 This kid was ‘Hoosier-born’ and thrown in the middle of a very dysfunctional family. Not to be deterred, I had a dream that was deep-rooted early on. When I first saw someone performing, the die was cast. Any opportunity to get on stage was just fine with me. I always felt I should be doing something and other people should be watching me do it. It seemed like a worthy goal to me. And I made it happen!

Standing in front of the theater at the beginning of my first Equity season in summer stock. I thought I had died and gone to heaven. Many great memories working with folks like Patricia Morrison, Tom Poston, Harve Presnell, Ann Sothem, Virginia Mayo, Peter Palmer, Dorothy Collins, Betty Ann Grove, Ron Holgate and Patrice Munsel… just to name a few. 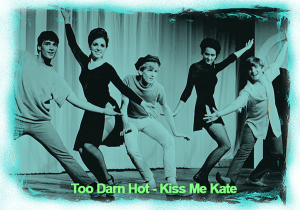 Being a chorus boy was as much fun as it looked, but an emergency involving the keyboard/conductor had the producer backstage asking me to step in and hold the musical reins. I did and that night put me on a new path altogether. Over the years I’ve played and/or conducted for Rosemary Clooney, Patrice Munsel, the divine Julie Wilson, the revival of ‘Pal Joey’ directed by Gus Shermer, the revival of ‘The Boys From Syracuse’ 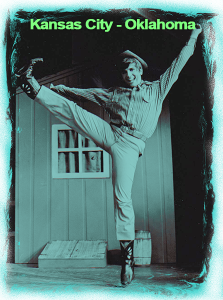 Directed by Christopher Hewitt and Bob Hergot, the original tour of ‘Dames At Sea’ in Chicago directed by Voight Kempson and starring the unbelievable Bernadette Peters, twice conducting for Marion Marlowe (‘The Great Waltz’ and ‘Toast To Broadway”), Dorothy Collins in her tour of ‘Sound Of Music’, Alan Jones in ‘Blossom Time’, Bruce Yarnell in ‘The Most Happy Fella’ and a string of summer theater productions too numerous to mention.

While still in Chicago, I did a lot of musical arranging for revues, singers and a few vocal groups (one of which I sang in). Some years later I formed a gospel group and with them recorded a lot of music that I had written. It was a grand adventure but the times demanded a change and for me that was a move West. Specifically to Reno, Nevada where I ended up on the world’s largest indoor stage in the the world’s largest show, Donn Arden’s unbelievable spectacle, ‘Hello, Hollywood, Hello’! To say the least, this changed the trajectory of my career forever! 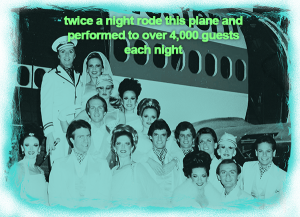 It was great fun to be a singing chorus boy again, in spite of all I had accomplished back home in Chicago. This was show biz on a scale I had only seen on film. That Western jet was real and all of us singers made our first entrance on it.

Towards the end of my almost three years with Hello, Hollywood; two other gentlemen and myself decided to create and produce an exciting revue of Broadway music that also included great show dancing. This production went by the name of “A Toast To Broadway” and first opened at the Ziegfeld Theater stage at the M.G.M. and then on the Lake Tahoe. From there the show went to L.A. and finally back to Chicago with an exciting run at the beautiful Drury Lane Theater. 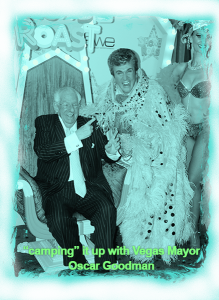 Went on my own for a couple of years and finally ended up in, where else, in Las Vegas. This was the Vegas before any of the corporate take-over and there were still plenty of the ‘boys’ calling the shots. The showrooms were flooded with stars, huge orchestras and some classy and great night clubs and restaurants. My first job was in one owned by the great Liberace and he was my first employer in town. I played piano and sang in the lounge of the Tivoli Gardens and it was a time to remember and celebrate. It turned out bizarrely prescient as this man was to have a major role in my future career! 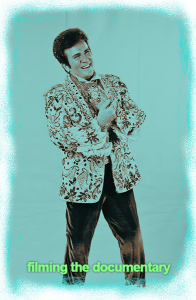 And then came the audition that really changed my life. The original Legends in Concert in Las Vegas used only impersonations of actual legends who had passed away. After Liberace passed, the show rushed getting the character in but with little artistic success. A friend suggested I audition and as an actor, classical pianist, dancer and humorist it seemed like a good idea. The night I auditioned I was hired and was working non-stop for well over twenty years doing my tribute to the incredible Liberace! As part of the ‘A’ list of performers with Legends, I opened new venues in cities all across America for the company and help the Legends brand become what it was. Many great memories including Legends in Concert On Broadway, in Tahoe, in Atlantic City, in San Francisco, in Copenhagen, in Chicago and of course the home-based company that used to have its own theater on the worlds famous Las Vegas strip!

Expanding my horizons in the tribute business I have appeared on the sitcom Growing Pains, the Phil Donahue show, Good Morning America, with the Dallas Symphony and in the film ‘The Calling’ with Faye Dunaway, Brad Douriff and Damian Chapa. I have also starred in my own Liberace tribute show which has played Harrah’s twice and also the main stage of the Tropicana Hotel/Casino in Atlantic City and in Las Vegas as well. In 2014, an incredible Liberace tribute Christmas show had its debut on the Las Vegas strip and was met with rave reviews and tremendous audience response. Recently I filmed a cameo appearance for a new film called ‘From Cowgirl to Showgirl’ which is about the first showgirl in Las Vegas! 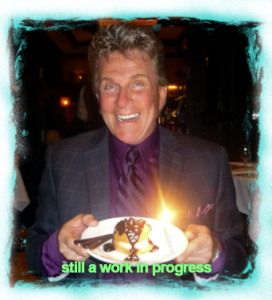 I created a new revue titled ‘Ridin’ High’ which features my Liberace tribute as well as beautiful dancers, great singers and lots of laughs and fun. We are touring the greater Southwest area. I am currently in rehearsals for an original play called ‘Liberace’ which will open this fall in Ivoryton, Connecticut with its pre-Broadway run. If all goes well I will be back in New York for the new season of shows! It’s hard to put a period on this page as this story and my life are still being written, so…… 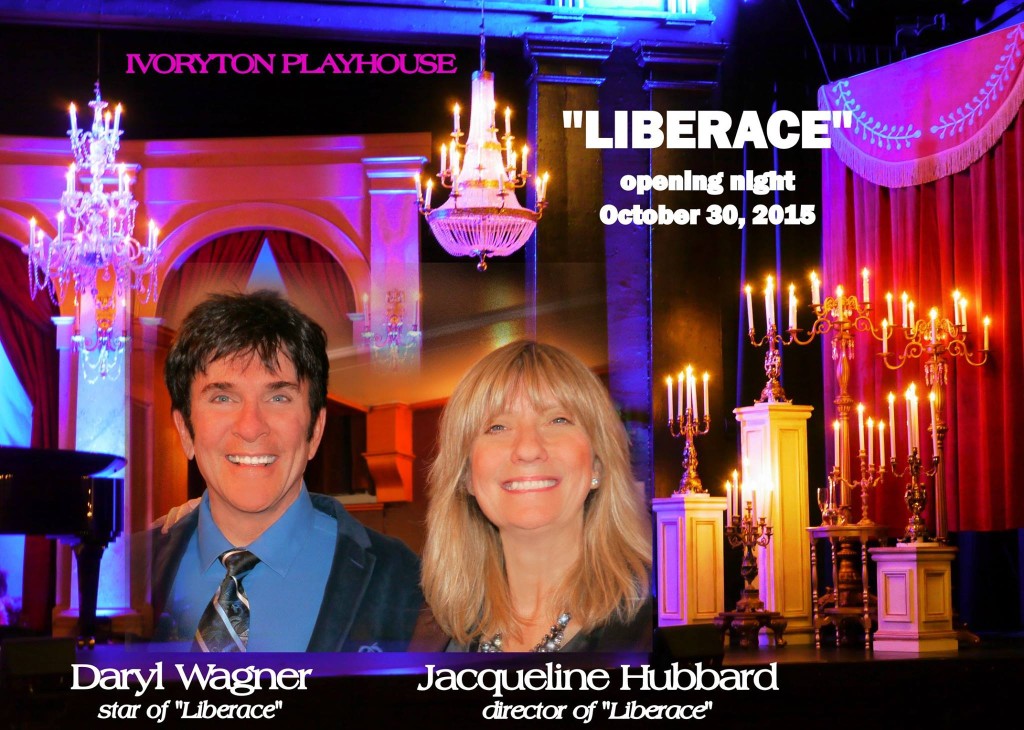 Check back here for video clips and images from rehearsals through to opening night!

He’s Back!
Liberace!
By Brent Hazelton 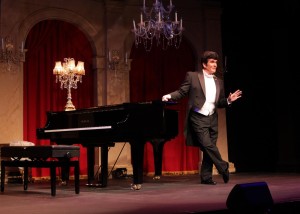 Ivoryton – On October 28th, the Ivoryton Playhouse will be putting on the glitz with Brent Hazelton’s remarkable new musical play, LIBERACE!, a moving and highly entertaining tribute to the performer and musician famous for his charm, flamboyance  and glamour. LIBERACE! relives the highs (and lows) of his prolific life, with a rollicking piano score spanning classical and popular music from Chopin to “Chopsticks,” and Rachmaninoff to Ragtime.

LIBERACE! gives audiences the unique opportunity to take a look at one of Milwaukee’s most remarkable and talented native sons. The show explores how a classically-trained pianist evolved into the larger-than-life persona lovingly known as “Mr. Showmanship.” Audiences will discover the private man hidden behind all of the glitz and glamour. Liberace’s career spanned four decades of concerts, recordings, television, motion pictures, and endorsements. At the height of his fame from the 1950s to the 1970s, Liberace was the highest-paid entertainer in the world, with established residencies in Las Vegas, and an international touring schedule. He was recognized during his career with two Emmy Awards, six gold albums and two stars on the Hollywood Walk of Fame. 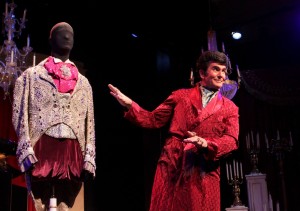 Liberace lived a life of flamboyance, flash, and lavish costumes and in this funny and touching tribute, the virtuoso musician gets one last chance to glitter and shine as he tickles the ivories through many of his favorite songs, including “I’ll Be Seeing You,” “Three Little Fishies,” and “The Boogie Woogie.”

This loving tribute to Liberace was written by Milwaukee Rep Associate Artistic Director Brent Hazelton, with original music direction and composition by Jack Forbes Wilson. This production is directed by the Playhouse Artistic Director, Jacqueline Hubbard and stars Daryl Wagner* in this iconic performance as the man who defined four decades of music and pop culture. 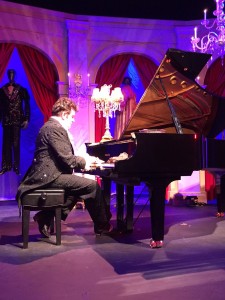 Wagner has an impressive career as Liberace, playing him for over 20 years across the world in the renowned “Legends In Concert” show, as well as many productions that he arranged and produced himself. Speaking of his early career in musical theatre, Wagner says, “I left a lucrative review called “Hello, Hollywood” and ended up in, where else, in Las Vegas. The showrooms were flooded with stars, huge orchestras and some classy and great night clubs and restaurants. My first job was in one owned by the great Liberace and he was my first employer in town. I played piano and sang in the lounge of the Tivoli Gardens and it was a time to remember and celebrate. It turned out bizarrely prescient as this man was to have a major role in my future career!”

Looking for something to do?  Ivoryton Playhouse was voted Best Place to See Live Theatre by the readers of the Shoreline Times!  Come and visit Essex and see a show at this Connecticut historic treasure!

Liberace's career spanned four decades of concerts, recordings, television, motion pictures, and endorsements. At the height of his fame from the 1950s to the 1970s, Liberace was the highest-paid entertainer in the world, with established residencies in Las Vegas, and an international touring schedule. Liberace embraced a lifestyle that earned him the nickname "Mr. Showmanship". He was recognized during his career with two Emmy Awards, six gold albums and two stars on the Hollywood Walk of Fame.

This season, Ivoryton Playhouse is back to full capacity for the first time in two years, yet the safety of our audience remains our primary concern. Before admittance into the Playhouse, vaccinated patrons are asked to provide proof of vaccination (with photo ID). If you are not vaccinated, you must provide a negative covid test result within 72 hours (with photo ID). Entry will be denied to patrons who do not provide the documentation as required. For the safety of all of our patrons, wearing of masks in the theatre is recommended.

If you are not feeling well or are experiencing any symptoms of covid, please do not travel to the Playhouse. We will gladly switch your tickets to another date within the same show (subject to availability).

These guidelines are subject to change at any time during the season. Knowing all audience members are covid-free will provide a safe and enjoyable experience for all.