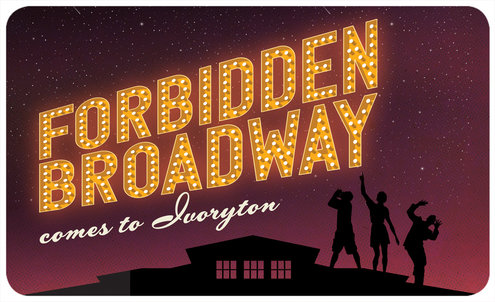 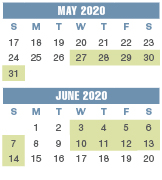 As you are all so painfully aware right now, COVID-19 has spread from an isolated outbreak to a distressing global pandemic. Our immediate concern is always the health and safety of our patrons, staff and actors and therefore we have elected to postpone the opening show of our season – FORBIDDEN BROADWAY COMES TO IVORYTON.  This show will now replace NATIVE GARDENS scheduled

This decision brings with it great challenges to all of us that work at the Playhouse. Hours have been reduced and some staff members have been laid off.

We will be offering free ticket exchanges into any other show of our 2020 season, including the cabaret nights, or you may donate the value of your tickets back to Ivoryton Playhouse as a tax-deductible donation. We would be so grateful if you would consider making this a charitable contribution to help us continue operating through this unprecedented crisis. The box office will be reaching out to all affected patrons. We ask patrons to await contact from the box office so that they can contact people for the opening performances first.

Our thoughts are also with you and your families at this time.

Stay safe, stay calm and look after each other.

We hope to see you at the Playhouse very soon.

In this special production of Off Broadway’s hit musical revue created for the Ivoryton Playhouse, Broadway’s greatest musical legends meet Broadway’s greatest satirist in this hilarious, loving, and endlessly entertaining tribute to some of the theatre’s greatest stars and songwriters. Featuring outrageous costumes, hilarious rewrites of the songs you know, and dead-on impressions by a stellar cast! 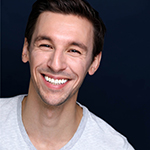 Christopher Behmke* is pleased be making his debut at the Ivoryton Playhouse. Chris has been a professional actor and singer since 2011 and has performed in theaters across the United States in productions such as Legally Blonde, Les Miserables, Cabaret, and Miss Saigon among others. He also spent several years with touring productions, most notably as “Tony” in the international tour of West Side Story, and with the 1st National Broadway tour of A Gentleman’s Guide to Love & Murder. Christopher is a graduate of Boston University and an Eagle Scout. Chris is particularly pleased to be returning to his native state, and would like to thank all the people in Connecticut who have so invaluably contributed to his theatrical journey; a supportive family and community, inspirational theatrical mentors, and indispensable vocal training and guidance. It’s good to be back home 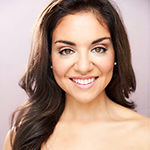 Sandra Marante* is thrilled to be working in Ivoryton on this fantastically fun show! She was last seen at Broadway at Music Circus in Sacramento as Daniela from In the Heights. Recent Credits: Stonewall (New York City Opera at Lincoln Center), Disney’s Beauty and the Beast (Dicapo Theatre), In the Heights,(Westport Country Playhouse, Playhouse on Park), Hatuey (American premiere, Peak Performances), Man of La Mancha (Princeton Festival), Madama Butterfly, and My Fair Lady (Charlottesville Opera). Sandra filmed her first costar TV role on Bull (CBS). Other TV: Quiero Ser Estrella (Univision). Graduate of New World School of the Arts (B.M.), Roosevelt University (MM) and UCONN (P.C.). All my love to Kam and Mom!! 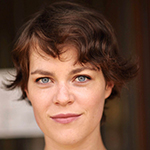 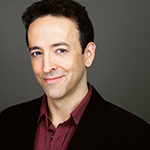 Josh Powell* is thrilled to return to Ivoryton having been seen previously in A Christmas Carol, My Way, Love Quest, and Burt & Me. He’s also performed at Goodspeed, Merry-Go-Round, The York, and Cherry Lane theaters as well as numerous opera companies including Utah Festival Opera, El Paso Opera, and Light Opera Oklahoma. Last season, Josh appeared at Penguin Rep (Art), Mabou Mines (Beulah Land), and Seven Angels Theatre (George and Gracie). Prior to that, he starred as El Gallo in Pittsburgh Public’s The Fantasticks and in Penguin Rep’s Syncopation. Love and thanks to the whole Playhouse family! www.Josh-Powell.com

By FRANK RIZZO
As published in Hartford Magazine
July 17, 2019 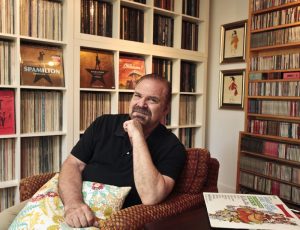 “How about some ‘Maggie Flynn’?” Gerard Alessandrini asks as he hands me the pristine album cover of the long-forgotten, ill-fated 1968 musical starring Shirley Jones and Jack Cassidy.

We are in the album room of the split-level, mid-century home he shares with his husband, Glenn Bassett, overlooking Mill Pond in Essex. The extra room for his collection of thousands of original cast albums was a major selling point and contains every musical you’ve ever — and never — heard of.

It’s an unexpectedly bucolic and serene place for a man whose life has been devoted to celebrating — and satirizing — the razzle-dazzle of Broadway. For more than 30 years, Alessandrini has created more than a dozen Manhattan revues that have run under the banner “Forbidden Broadway.” In 2006 he even received a special Tony Award for his parodies of Broadway’s best — and sometimes worst — efforts.

But of all the shows, nothing has struck such a chord as “Spamilton!” — his musical spoof of how Lin-Manual Miranda has revolutionized Broadway with his mega-hit “Hamilton.” As soon as “Spamilton” opened in 2016 it, too, became a must-see show, attracting crowds that included longtime “Forbidden Broadway” fan Stephen Sondheim and even “Hamilton” creator Lin-Manuel Miranda and the show’s creative team.

Alessandrini, 65, has always been a musical fan at heart, growing up in Needham, Mass., just outside Boston during the waning days of the out-of-town, pre-Broadway tryout circuit. 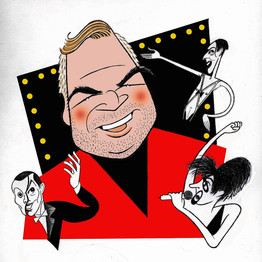 After graduating from the Boston Conservatory of Music in the late ‘70s, Alessandrini headed to New York to make his mark as an actor-singer but, like many, he turned to temp jobs to survive. One in 1981 was at the front desk of a cafe at Lincoln Center, where he would write parodies of show tunes on the back of paper placemats.

“One of the first lyrics I wrote was, ‘I wonder what the king is drinking tonight,’ because from across the plaza Richard Burton was starring in a ‘Camelot’ revival, and we were working the night they had to bring down the curtain down on him because he couldn’t go on with the show.”

But the beginnings of “Forbidden Broadway” were almost swept away by a wayward wind.

“One night, I was seating somebody inside and a wind came and blew away the 20 pages of lyric sheets I had at my outdoor station. The next day my manager came to me and said, ‘Gerard, they found these papers floating in the Lincoln Center fountain last night and we thought they’ve got to be yours.’ I said, ‘Thanks, Bob. That’s my show.’ ”

His first “Forbidden Broadway” show opened in 1982, and it received a big boost when Rex Reed raved abut the show in his newspaper column. 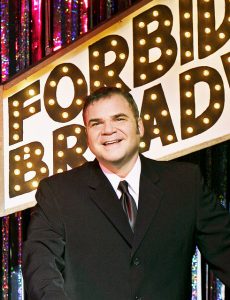 “We would come to do the show and there would be 10 limos parked in front of the Triad Theatre,” Alessandrini recalls. Ethel Merman, Mary Martin, Prince Rainier, Paul Simon, Christopher Reeve, Carol Channing and George Burns were early fans of the show, often laughing at parodies of themselves.

And his reaction to having his idols’ applause?

“We were young, and you don’t know how really wonderful that it is as it’s happening. You think that’s just what happens in your life.”

He says when the creators of the shows turned out — such as John Kander and Fred Ebb (“Cabaret,” “Chicago”) and Jerry Bock and Sheldon Harnick (“Fiddler on the Roof”) — he worried that they might sue. “But we ended up getting a lot of the music rights because Sondheim said it was OK. He understood that parody was healthy.”

In the revues, “Grand Hotel” became “Grim Hotel.” Ann Miller singing “I‘m Still Here” from “Follies” became “I’m Still Weird.” Bernadette Peters’ vocal challenges in a show became her spoofing counterpart singing “See Me on a Monday.” “Company”’s “Being Alive” became “Being LuPone” when that diva starred in the revival. Mandy Patinkin became a regular target. One had him singing to the “Mary Poppins” tune, “Super-Frantic-Hyper-Active-Self-Indulgent-Mandy.”

“But some years — mostly in the ‘80s — were hard when Broadway wasn’t doing so well and there wasn’t much to parody,” he says. For one show, the revue’s announcer said: “‘Forbidden Broadway’ salutes the hits of the season,’ and the lights would come up and there would be nothing on stage — and then the lights would be lowered.”

The British Invasion of mega-hits offered a new wave of satirical opportunities, and with the arrival of Disney 20 years ago and a booming Broadway that followed, there has been a wealth of material to keep each new edition of the shows fresh. After the last “Forbidden Broadway” revue in 2014, Alessandrini took a break but the arrival of “Hamilton” the following year drew him back.

“This was the biggest hit show that’s come to Broadway since I’ve been in New York, and I would feel unfulfilled if I didn’t finish the job.”

But “Hamilton” required more work than he’s ever put in a parody. “To turn a song inside out I have to practically memorize it and know exactly what the author was doing and where they were coming from. For ‘Hamilton’ there was a lot of material and a lot of research I had to do on Hamilton and the rap artists Miranda was referencing. It’s hard work but it’s fun hard work — but it’s hard work.”

Alessandrini often turns a show’s point of view upside down but in “Hamilton”’s case Miranda had already done that by making Aaron Burr such a prominent character. So he decided to make it all about Miranda and the phenomenon of the show itself. One of the musical’s most famous song was transformed into “(I Wanna Be in) The Film When It Happens.”

Alessandrini also managed to slip in bits from his go-to tropes, including “Gypsy,” “Chicago” and ‘Sweeney Todd,” and personalities, like Audra McDonald, Barbra Streisand and Liza Minnelli. Even Sondheim makes an appearance as a kind of Broadway Yoda.

“When Miranda came to see the show I was a little nervous,” says Alessandrini, “because I don’t know him that well, just as an acquaintance, so I wasn’t sure how he would take it about being the subject of the show.”
[Related] Frozen: Climbing the ice is an exhilarating winter adventure »

The answer: He loved it, spent time with the cast after the show and gave him and the cast tickets to see “Hamilton.” 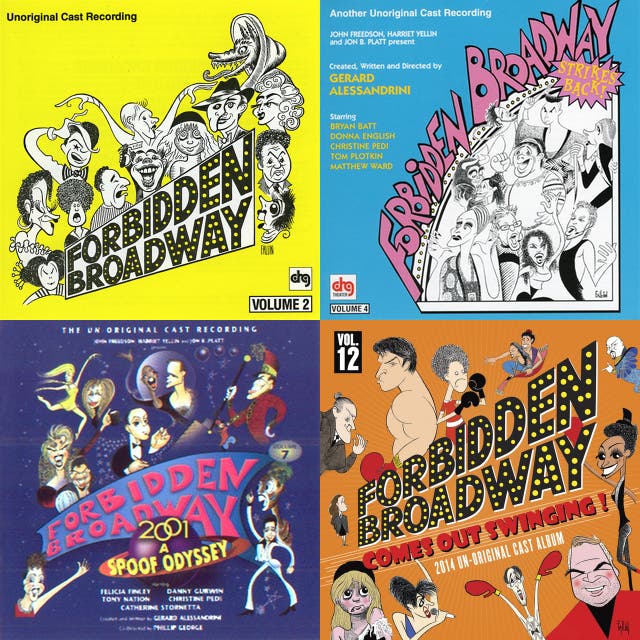 But he’s excited about the new wave of shows: the dark “Oklahoma!” The journey to hell in “Hadestown.” And the self-aware, self-referential “Beetlejuice.” “That show is very meta-musical, very ‘Forbidden Broadway.’ Sondheim and I were once talking about some musical and he said, ’It’s a very ‘meta-musical.’ I said, ‘What’s that?’ And he said, ‘Gerard, don’t you know? You invented it.’”

Click through to this link to see the original article and more photos of Allessandrini’s beautiful Ivoryton home as published in courant.com.

"Forbidden Broadway" is an Off-Broadway revue parodying musical theatre, particularly Broadway musicals sharply spoofing show tunes, characters and plots of contemporary and current Broadway musicals. "Forbidden Broadway" and its many sequels have mocked popular shows like "The Phantom of the Opera", "Wicked", "Les Mis", "The Lion King", "Spamalot", "Rent" and "Newsies". The revue also targets famous Broadway actors, writers, composers, directors, choreographers and producers. Conceived, written and directed by Gerard Alessandrini, the original version of the revue opened on January 15, 1982, at Palsson's Supper Club in New York City and ran for 2,332 performances. Alessandrini has rewritten the show more than a dozen times over the years to include parodies of newer shows. The show, in its various editions, has been seen in more than 200 U.S. cities as well as playing in London, Tokyo, Singapore and Sydney.