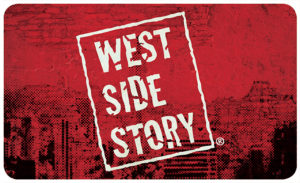 At the Ivoryton Playhouse

Ivoryton – Shakespeare’s Romeo and Juliet is transported to modern-day New York City in the breathtaking musical, WEST SIDE STORY which opens at the Ivoryton Playhouse on July 5th. With book by Arthur Laurents, music by Leonard Bernstein, and lyrics by Stephen Sondheim, the original 1957 Broadway production ran for over 700 performances before going on tour, and garnered 6 Tony nominations.

The story is set in the Upper West Side of New York City in the mid-1950s and explores the rivalry between the Jets and the Sharks, two teenage street gangs of different ethnic backgrounds. When, Tony, a Jet, falls in love with Maria, a Shark, the young lovers struggle to keep their love alive in a world of hate, violence and prejudice. The dark theme, sophisticated music, extended dance scenes, and focus on social problems marked a turning point in American musical theatre when it was first produced; WEST SIDE STORY remains one of the most innovative, heart-wrenching and relevant musical dramas of our time.

The film version starring Natalie Wood, Russ Tamblyn, Richard Beymer and Rita Moreno won 10 Academy Awards and in 2009, Karen Olivo won a Tony for her portrayal of Anita in the Broadway revival.

Stephen Mir* returns to Ivoryton to play the role of Tony and Mia Pinero* makes her Ivoryton debut in the role of Maria.

The production is directed and choreographed by Todd Underwood and musical directed by Mike Morris, with set design by Dan Nischan, lighting design by Marcus Abbott and costume design by Elizabeth Cipollina.  Executive Producers are Michael A. Dattilo and Frank Perrotti.

Tonight, Tonight, won’t be just any night!  Don’t miss the experience of this show live on stage at the Ivoryton Playhouse.

Members of the press are welcome at any performance after July 6th.  Please call ahead for tickets.