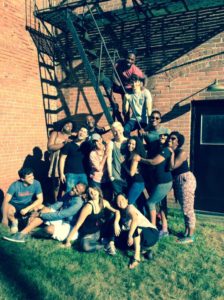 The cast of RENT

Loosely based on Puccini’s opera, La Boheme, RENT details one year in the life of seven artists & musicians, living in New York’s run down “Alphabet City” in the late 1980s.  As this circle of friends struggle with life, love, infidelity, and the usual hopes & fears of modern day life, they must also cope with drug addiction and the rising specter of AIDS.  In the midst of all this, one of them attempts to capture all of their lives on film, hoping to make artistic sense of it all.

Jonathan Larson died in 1996, the day before his musical opened in New York. He never witnessed its phenomenal success. RENT opened on Broadway on April 29, 1996. It went on to win every major best musical award, including the Tony Award, as well as the Pulitzer Prize for drama.  RENT closed after 5,124 performances and is the seventh longest running show in Broadway history.  Over the course of its groundbreaking 12-year New York run, RENT transformed the definition of musical theater – and changed Broadway forever.  The musical has been translated into every major language and been performed on six continents.

After Larson’s death and the amazing success of his musical, his friends wanted to honor his commitment to his community of people whose lives are a daily struggle for survival. They set aside the first two rows at each performance as $20 seats so that the people the show was about could afford to see it. These special tickets would go on sale at 6:00 p.m. each night and the line usually formed by noon on weekdays and often twenty-four hours in advance on weekends. In honor of Jonathan Larson and the community that we serve, the Ivoryton Playhouse will save 20 seats for every performance at a $25 price.  Those seats will be available at the box office after 6pm every show day (after 1pm for matinees)*.

If you are interested in helping support this program or our Little Wonder program that provides a free night at the theatre for patients and their families dealing with the nightmare of cancer, please give Krista a call at 860 767 9520 ext 205.

* tickets cannot be reserved in advance and are available from the box office only after 6pm for an evening show and 1pm for a matinee.  Limit of 4 per person.  Seats will be given from an allocation already determined.  Promotion does not apply to tickets already purchased and will not be exchanged for seats already purchased.  Please, no phone calls.