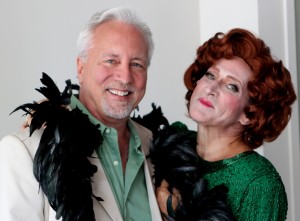 The Best of Times is Now!
La Cage Aux Folles
at the Ivoryton Playhouse

After twenty years of un-wedded bliss Georges and Albin, two men partnered for better-or-worse get a bit of both when Georges’ son announces his impending marriage to the daughter of a bigoted, narrow-minded politician. Albin tries to help by making a perfect family with hilarious results. Further complicating the situation, Albin and Georges run a drag nightclub in St. Tropez, where Albin is the star performer ‘Zaza.’ Georges reluctantly agrees to masquerade as “normal” when he meets the family of the bride-to-be. But Albin has other plans, with hilarious results.

The show features some beautiful songs by Jerry Herman including I Am What I Am and Song on the Sand, and some hilarious situations. But, more than anything else, LA CAGE is an old fashioned love story wrapped in feathers, sprinkled with glitter and tied with a bow. This wild and warmhearted farce about the importance of nonconformity and being true to oneself will appeal to audiences of all ages.

Directed by Lawrence Thelen, choreographed by Todd Underwood and musical directed by Michael Morris, the show features David Edwards* as Albin and James Van Treuren* as Georges. Edwards has appeared on Broadway in BY JEEVES and THE ROTHSCHILDS and Van Treuren was in THE SCARLET PIMPERNEL. Both actors have performed these roles before and are good friends on and off stage. Zach Trimmer* is reviving the role of Jean Michel for his third time; marTina Vidmar* is Jacqueline; Frank Calamaro* of Chester is Ms. Dindon and Samantha Talmadge of Groton is Mme. Dindon

The set is designed by Cully Long, lighting by Doug Harry, wigs by Liz Cipollina and costumes by Njaye Olds.

LA CAGE AUX FOLLES opens in Ivoryton on August 6th and runs through August 31st. Performance times are Wednesday and Sunday matinees at 2pm. Evening performances are Wednesday and Thursday at 7:30pm, Friday and Saturday at 8pm. There are 2 extra matinees for this show on Saturday August 16th  and 23rd  at 2pm. Tickets are $42 for adults, $37 for seniors, $20 for students and $15 for children and are available by calling the Playhouse box office at 860-767-7318 or by visiting our website at www.ivorytonplayhouse.org  (Group rates are available by calling the box office for information.) The Playhouse is located at 103 Main Street in Ivoryton.