The Seven Year Itch
at the Ivoryton Playhouse

A fabulously funny farce from the fifties! 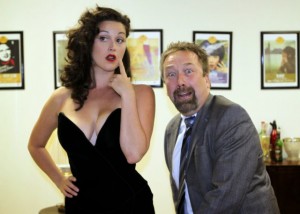 Ivoryton:  Looking for something a little different this fall? Then head to the Ivoryton Playhouse to experience one of those plays that are part of our common cultural heritage but which are rarely given professional productions. The Seven Year Itch opens in Ivoryton on October 30th and runs through November 17th. Most people remember the Billy Wilder movie with Tom Ewell and Marilyn Monroe, and even if they haven’t seen the movie, who could forget the iconic photograph of Marilyn in the white dress over the subway grate?

But the play proves itself remarkably fresh and funny, and a lot edgier than the film. With his wife and child off to the shore for the summer, but a job that keeps him in their downtown apartment during the work week, a husband of seven years fantasizes about having a fling with a young woman who is apartment sitting in the unit above. The scenes in his head combine with actual events as his fantasies and his fears merge into a hilarious comedy.

When Axelrod wrote The Seven Year Itch in 1952, he was already a veteran of 400 radio and film scripts. His one desire was to do a Broadway hit play, which put him at odds with most of his fellow playwrights who wanted write Hollywood movies. The Seven Year Itch played for 1141 shows on Broadway, before being adapted to the Billy Wilder film with Tom Ewell and Marilyn Monroe.

Costumes are by Kari Crowther, set design by Dan Nischan and lights by Marcus Abbott.

The Seven Year Itch opens in Ivoryton on October 30th  and runs through November 17th Performance times are Wednesday and Sunday matinees at 2pm. Evening performances are Wednesday and Thursday at 7:30pm, Friday and Saturday at 8pm. Tickets are $40 for adults, $35 for seniors, $20 for students and $15 for children and are available by calling the Playhouse box office at 860-767-7318 or by visiting our website at www.ivorytonplayhouse.org (Group rates are available by calling the box office for information.) The Playhouse is located at 103 Main Street in Ivoryton.