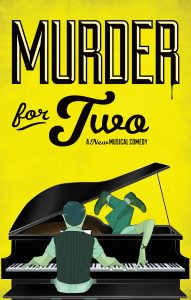 The Ivoryton Playhouse will open its doors for a 5-play season on July 8, 2021.

It’s time to get out and share some music and laughter and we’ll be providing it with a liberal dash of blood with MURDER FOR TWO!

MURDER FOR TWO, by Kellen Blair & Joe Kinosian, is the perfect blend of music, mayhem and murder! In this hilarious 90-minute show, 2 performers play 13 roles—not to mention the piano—in a witty and winking homage to old-fashioned murder mysteries.

The New York Times calls it “INGENIOUS! A snazzy double-act that spins out a comic mystery animated by funny, deftly turned songs.” You won’t want to miss this killer musical comedy! 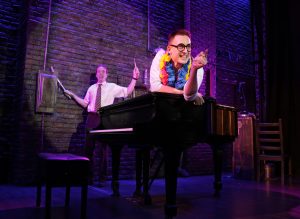 MURDER FOR TWO was developed at The Adirondack Theatre Festival and 42nd Street Moon. Chicago Shakespeare Theater presented the World Premiere Production in May, 2011, which was extended 4 times and ran for more than 6 months. Kinosian and Blair were recognized with a 2011 Joseph Jefferson Award for Best New Musical

Everyone is a suspect in MURDER FOR TWO – Ian Lowe*, who was last seen in Ivoryton in THE WOMAN IN BLACK, plays the detective, and Joe Kinosian* plays all 13 suspects and they both play the piano! Joe also co-wrote this smart, funny musical and we are thrilled to have him perform his tour de force in Ivoryton.

A zany blend of classic musical comedy and madcap mystery, this 90-minute whodunit is a highly theatrical duet loaded with killer laughs. Don’t miss this opportunity to step back into life and laughter at the Ivoryton Playhouse! 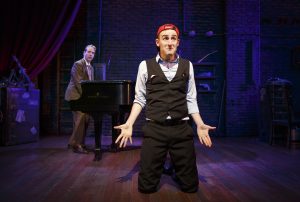 The show is directed and choreographed by Wendy Seyb, the set is designed by Martin Marchitto, lighting by Marcus Abbott and costumes by Elizabeth Saylor.

The second show in our 2021 Summer Season will be:

HAVING OUR SAY:  THE DELANY SISTERS FIRST 100 YEARS
by Emily Mann, adapted from the book “Having Our Say”
August 12th – September 5th, 2021
A beautiful, funny and heartfelt family drama based on the bestselling memoir of Bessie and Sadie Delany – trailblazers, activists and best friends.

MORE SHOWS TO BE ANNOUNCED SOON