Receive Our Newsletter
Categories
Archives
Tags
The reviews are in – “Biloxi Blues” is a hit!→
← This week! “Her Song” PSA Musical – School and Public Performances
Last week on Stage – “Biloxi Blues” by Neil Simon – check out our new video clip

Now on stage….
Biloxi Blues
By Neil Simon
At the Ivoryton Playhouse 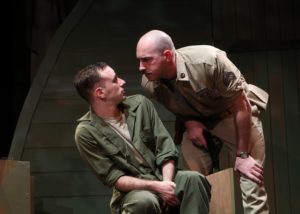 Ivoryton – The Ivoryton Playhouse is leaving behind the music of Ol’ Blue Eyes and heading south to the steamy bayou country of Biloxi, Mississippi with the opening of Neil Simon’s BILOXI BLUES on April 26th. This semi-autobiographical play details his experiences as a young man in boot camp before he was shipped off to serve in the Second World War.

BILOXI BLUES is the second chapter in what is known as his Eugene trilogy, following Brighton Beach Memoirs and preceding Broadway Bound, and is the only one in which Eugene is not the central character. BILOXI BLUES won the Tony Award when it opened on Broadway in 1985 and ran 524 performances.

Neil Simon’s hit play follows the adventures of Eugene Morris Jerome and his fellow Army inductees as they struggle through basic training near Biloxi, Mississippi, in 1943. An aspiring writer who sees himself as an outsider observing the craziness around him, Eugene hopes to somehow remain “neutral … like Switzerland” but finds himself having to make tough choices. 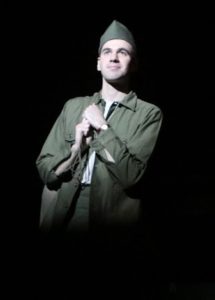 BILOXI BLUES is a comedy with real depth about young men growing up, learning about life and how to live together and finally, going off to war. These men are universal soldiers – facing the same fears, anxieties, and loneliness that grip all young recruits about to encounter the ultimate test of combat. Mr. Simon brings his great sense of humor and humanity to every word of this magnificent play.

A film was also made of the play starring Matthew Broderick and directed by Mike Nichols with screenplay by Neil Simon. 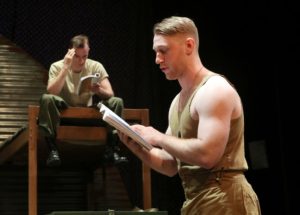 *denotes member of Actors Equity
Members of the press are welcome after April 27th.  Please call ahead for tickets.

Call our box office at 860.767.7318 to purchase individual tickets or follow this link to purchase online.