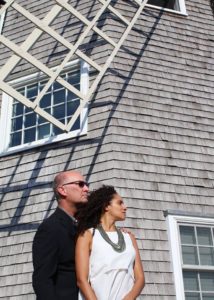 The Ivoryton Playhouse will open MAN OF LA MANCHA on September 7th and the timing could not be more appropriate. The media fueled fear and divisiveness; the circus that is the current political situation and the general instability of the world at large make dreaming impossible dreams an inviting and desperately needed antidote.

One of the world’s most popular musicals, MAN OF LA MANCHA, is based on Cervantes’ masterpiece Don Quixote, and tells of the adventures of a mad, aging nobleman who embarrasses his respectable family by his adventures.  Backed by his faithful sidekick Sancho Panza, he duels windmills and defends his perfect lady, Dulcinea.

The show itself has Connecticut roots. It was the Goodspeed Opera House, which took a TV adaptation of “Don Quixote” by Dale Wasserman and turned it into “MAN OF LA MANCHA” the musical with music by Mitch Leigh and lyrics by Joe Darion, back in 1965.

Winner of 5 Tony Awards, including Best Musical, MAN OF LA MANCHA is a remarkable show and one of the great theatre successes of our time. This is a play-within-a-play – a poignant story of a dying old man whose impossible dream takes over his mind. It’s All the Same, Dulcinea, I’m Only Thinking of Him, The Impossible Dream, I Really Like Him and Little Bird remain in your thoughts and in your soul well after you see the show.

David Pittsinger*, who performed here last year to great critical acclaim as Emile de Becque in SOUTH PACIFIC,  will be playing Don Quixote.  He will be joined by Talia Thiesfield* as Aldonza, Brian Michael Hoffman* as Sancho Panza, Jimmy Van Treuren* as the Innkeeper, Amy Buckley as Antonia, Melissa McLean as the Housekeeper and Matthew Krob as the Padre. The motley crew of prisoners and muleteers include Brian Binion, Ryan Cavanaugh*, AJ Hunsucker, James Ludlum, Conor McGiffin and Stephen Mir.

The show is directed by David Edwards who is doing double duty by also appearing on stage as Carasco. Choreographed by Todd Underwood, the set is designed by Daniel Nischan, lighting by Marcus Abbott and costumes by Elizabeth Cipollina. Musical direction is by Paul Feyer.