The Producers continues to WOW reviewers…

BroadwayWorld.com review of The Producers!

BWW Reviews: Ivoryton Playhouse’s THE PRODUCERS Has Got It and Flaunts It

Here are excepts from the broadwayworld.com review…

With a musical about a con artist trying to mount a flop show, Ivoryton Playhouse has ended up with a hit on its hands.  Unlike Mel Brooks‘ failed producer Max Bialystock, Ivoryton’s charming theatre was aiming for a smash with The Producers and they have succeeded.  The Opening Night audience was doubled over with laughter throughout and it was gratifying to see the small shoreline company stretch well beyond its comfort zone with such a large, technically-complicated show.   Although Bialystock’s shows generally send critics and audiences fleeing the theatre at intermission, audiences should hurry to quaint Ivoryton to see a revival of the show that won the most Tony Awards in history.

…..Of course, for The Producers to produce the goods, it needs a crackerjack Max and Leo.  Ivoryton Playhouse has wisely cast R. Bruce Connelly as Bialystock.  And Connelly wisely makes no attempt to dial down Nathan Lane‘s kinetic, frenetic performance.  In fact, there are times when Connelly sounds just like Lane.  Michael McDermott‘s take on Leo Bloom is similarly inspired by Matthew Broderick‘s neurosis-addled performance.  Fortunately for McDermott, he is blessed with a stronger tenor than Ferris Bueller and matinee-idol good looks.

William Broderick and Schuyler Beeman are scene-stealing standouts in the roles of the disastrous Director Roger DeBris and his lisping common-law assistant/houseboy  Carmen Ghia.  Broderick in particular brings the house down with his mincing “Springtime for Hitler” number.  Liz Clark Golson’s buxom bombshell Ulla indeed has a big voice, big bazooms and legs for days.  No wonder Max and Leo both fall for her Scandinavian charms…..

…..The young ensemble hoofs and sings with aplomb, particularly in the big set piece numbers “Along Came Bialy” and “Springtime for Hitler”…….he costumes designed by Vivianna Lamb are delicious (particularly the beer, pretzel and sausage showgirl outfits during “Springtime”)……John Sebastian DeNicola does a fantastic job making a 6- (7 on weekends) piece pit orchestra sound like a much larger ensemble.

One could grouse that Ivoryton does not make enough of an effort to put its own stamp on The Producers, but it would be just that, grousing.  The show is not a sure-fire hit (as the flop film version attests), so it is to the small theatre’s credit that they have stuffed this stellar revival on their stage with fewer resources.  Bravo to Ivoryton Playhouse for celebrating its 100th birthday with a big, gaudy, glitzy musical.  When you’ve got it, flaunt it.

Monday, August 15 @ 7:00pm – Neva Small
Neva has distinguished herself as a singer and actress in theaters, in concert halls across America, on film, and on television. Her signature role of Chava in the film version of Fiddler on the Roof remains a classic.

Monday, August 29 @ 7:00pm – Morgan Crowley
We are delighted to welcome Morgan back to Ivoryton.  He was last seen on stage starring in The Irish…And How They Got That Way.  Incredibly talented, Morgan is sure to be a crowd pleasing favorite!

The Producers at the Ivoryton Playhouse

Middletown Press review of The Producers – “A Sure Fire Hit!”

When a staid and conservative accountant meets a conniving and opportunistic theatrical producer, it is a match made in shyster heaven.  The number cruncher Leopold hatches a scheme that appeals to the avaricious drama diva Max and soon the pair is off to make millions. 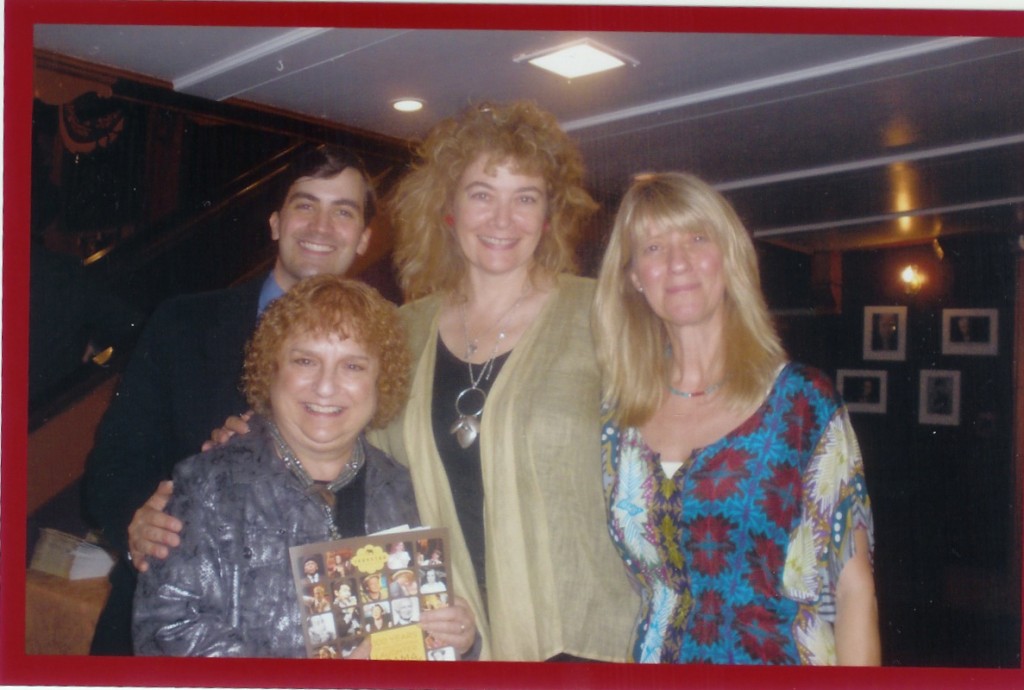 If you want to go along for the glorious ride, hang on to the coattails of Michael McDermott’s Leo Bloom and R. Bruce Connelly’s Max Bialystock in the Ivoryton Playhouse’s rousing romp of a musical, Mel Brooks and Thomas Meechan’s ‘The Producers,” until Sunday, July 31.

Max and Leo’s plan is simple and ingenious: find the world’s worst play, cast terrible actors, hire a dreadful director and then raise tons of dollars by selling shares that are sure to never make a penny for the unwitting investors.  With the cardinal rule that “the IRS isn’t interested in a show that flops,” “Springtime for Hitler” is a guaranteed moneymaker for the pair of con men.

Once the proper elements are in place, and Max convinces the cowardly Leo that “We Can Do It,” Max assembles his cadre of little blue haired ladies, exchanging cuddles for checks, from his investors who love to give.

When their grand scheme turns into an unmitigated disaster, that is when critics and audience members alike embrace this love song to Hitler, Max and Leo have a lot of “esplaining” to do, a la Ricky Ricardo, to the police.  The frantic fun escalates under director Julia Kiley’s capable hands.

The old adage that “the show must go on” has been tested thoroughly here, first by R. Bruce Connelly who had an emergency appendectomy last week and rallied to go on opening night, the set designer Tony Andrea who collapsed soon after and was rushed to the hospital and Mark Woodard’s Franz Liebkind who was kicked accidentally and landed in the emergency room.  “Break a leg,” the superstitious greeting for good luck,  takes on a whole new meaning, especially since Woodard’s character ends up with two broken legs in the show.

Discover how a little creative accounting and a desire  for a career in show business can go a long way …directly to jail, without passing GO and collecting $200, yet provide a whole Monopoly game board of entertainment along the way.

Hear our new radio ad for The Producers!

Click on the link below to hear our latest ad:

The Producers opened at the Ivoryton Playhouse yesterday with two packed shows – and audiences loved it!  We received these emails this morning:

To the cast and crew:

I attended last night’s (Wed. 7/6) performance and want to let you know how much I enjoyed it — it was fall-off-your-chair-laughing funny, and with all that’s going on in the world today, boy do we ever need to laugh.  The show was fantastic and the cast did such a great job.  R. Bruce Connelly is one of my favorites, and I was disappointed when it was announced that he would not be able to perform (and hope he’s doing well and has a speedy recovery).  But Buzz Roddy was just awesome in the Max Bialystock role–bravo!  Casting came up with perfect performers for the roles; coreography was great, and congratulations to Julia Kiley on her direction.  Whoever thought this production might be too much for the Ivoryton Playhouse doesn’t know the Ivoryton Playhouse!

Dear Bev,
Thank you so much for the tix last night!
What a wonderful show! We had a terrific time and can’t wait to come back in a week or so to see Bruce.
Please extend congratulations to all!
Many, many thanks!
P.S., Guilford

One of the largest productions ever attempted at the Ivoryton Playhouse opens today.  The Producers features a cast of 20, huge sets, unbelievable costumes and a whole lot of talent on stage!  Photos from dress rehearsal just released.  Click here to see images from this fantastic show!  Don’t miss The Producers at the Ivoryton Playhouse – running until July 31.  Tickets on sale now – (860) 767 7318.

Happy 4th of July to all

Don’t you love a parade?  We do too!  Don’t miss the 6th Annual Ivoryton Village Parade featuring, of course, the Ivoryton Playhouse!  Monday, July 4 from 10am throughout the village of Ivoryton.  The Grand Marsal is Aggie Waterman from Aggies Restaurant.  Don’t miss this great tradition!  And be sure to give a shout out to members of the cast from The Producers who will be marching and dancing and singing!  Happy 4th everybody!!!

We are experiencing technical problems

Our sincerest apologies to those trying to purchase tickets on line.  We are experiencing problems with our internet provider that has caused interruptions in service.  Please don’t give up!  You can call 860.767.7318 to book your tickets over the phone or pop in to our box office at 103 Main Street, Ivoryton and it would be our pleasure to help you choose your seats.  Thank you for your patience while we wait for our service to be restored.